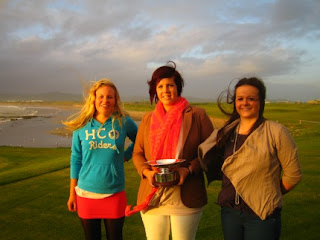 Congratulations to our Midlothian girls who have done fantastically well at Machrihanish. Seven have qualified in the top 32 for the Championship matchplay stages. Well done to Rachael Watton who finished joint second with rounds of 74 & 77. The others to qualify are Jane Turner, Karen Marshall, Noreen Fenton, Wendy Nicholson, Gabrielle MacDonald and Kirsten Blackwood.
Kate McIntosh just finished outside the top 32 and will play in the Clark Rosebowl matchplay.
The best County team was won by Midlothian who won the McNeil Trophy – well done Rachael, Jane and Gabrielle.
Rachael also won the Glover 21st Anniversary Cup for the lowest gross score in round 2, pipping Noreen Fenton by the bih. Noreen did, however, win the Lyon Salver for having the best net in round 2.
The matchplay stages begin this morning and you can keep up to date with how the girls are doing by logging on to http://www.slga.co.uk/ – live scoring.
Well Done Girls and good luck with the matchplay.
Scottish Ladies (Close) Amateur Championship 2011