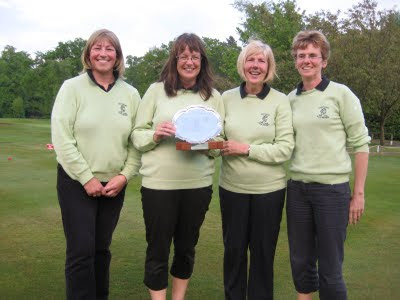 Congratulations to the Kingsknowe Ladies team of Louise Fraser, Gill Petrie, Kate Rorke and Sheila Lyon who won the Edinburgh Inter-Club at Newbattle yesterday for the first time in 24 years. (I am told one member played in that match, but I’m sure that’s not true!). They beat Murrayfield in the first round 5&3, the holders Baberton in the 2nd round 4&3 and Musselburgh in the semi-final 2&1, to reach the final against Broomieknowe who were looking strong in their path to the final. In the first match Kate and Shelia took on the strong pairing of Wendy Nicholson and Kate McIntosh and despite a strong start, were 2 down playing the 17th. But Louise and Gill sealed it with an emphatic 7 shot win over Hannah Scott and Katherine Anderson to record a 5&4 team victory.