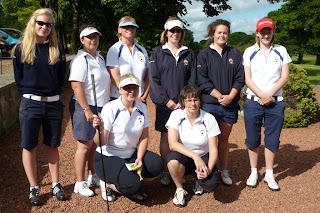 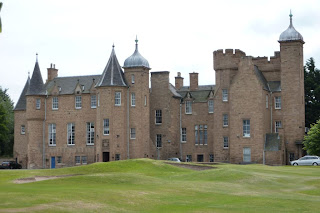 What a gorgeous day it was in East Lothian today – not only from a weather point of view but also the golf! After yesterday’s practice at Royal Musselburgh, dinner at the Beefeater and a good night’s sleep at the Premier Inn, the team were all up for their first game of this year’s matches – Fife.
There was no dispute over the morning foursomes pairings. First off would be be Karen Marshall and Wendy Nicholson with the dream team caddies of Fiona Smith and Margaret Ritchie. Next would be Rachael Watton and new kid on the block, Kate McIntosh, with super caddy Hannah Scott and Kate Johnson, and third couple would be Louise Fraser and Claire MacDonald with Dorothy Fraser and Ann Barr at the trolley driving wheel.
Karen and Wendy stuck their noses in front and then refused to relinquish their lead. After 14 holes the pair shook hands with their opposition and recorded a 5&4 win. Unfortunately Claire struggled with an old injury and she and Louise went down by 5&4 before Claire took off for treatment. The “kids” played well in a nip and tuck battle. Finally, with the opposition rebounding off a sign which stopped the ball reaching a bunker and left them just on the edge of the green and able to win the hole and take a 2 hole lead with 4 to play, Rachael had had enough! This game was going to be won and what style that was done in! Winning 15 and 16 and halving 17, the girls reached the 18th tee all square. The 18th is being played from the men’s medal tee and measures 369 yards. Rachael launched her drive, hitting the ball roughly 320 yards, straight down the middle, and leaving Kate a 50 yard pitch which she judged to perfection. After watching the opposition get their par 4, the stage was set. After lining up her 10-15 ft putt, Rachael stepped up to strike the ball. All of the Midlothian spectators held their breath as the ball headed closer and closer towards the hole and raucous cheering was heard as the ball finally disppeared from sight and the game was won and the foursomes Midlothian’s by 2 matches to 1.
And so to the afternoon. Problem here – in what order to play everyone? No problem with no.1 slot – Rachael! But who would we play at no. 6? Where would we put Kirsten Blackwood and Gabrielle Macdonald? With that decided we finally handed in our team card – Rachael, Wendy, Kirsten, Gabrielle, Louise and, anchor girl, Karen. Rachael was very business like – well, she had to make sure she was finished in time to get to an appointment back in Edinburgh! – and brought home the first of the 3 points we needed for overall victory. Wendy had a tough afternoon with no room for error and had to succomb to a 5&4 loss. Next up, Kirsten battled away. Having been 3 up early on, she was hauled back to all square before losing the dreaded 14th. She kept on fighting but finally went down by 2&1. Newby, Gabrielle, was next in the firing line and had an exceedingly tough draw against past Scottish Amateur Champion Elaine Moffat. It was nip and tuck the whole way, until eventually Elaine broke away and came out in front by 2&1. We were then looking for the tail to wag and, boy, it did! Just when the Captain felt she couldn’t take any more, Louise arrived on the 14th tee, 3 up! Having been told her point was crucial, she kindly obliged by wining the 15th and recording a 4&3 victory. Then came back marker Karen – 3 up again on the 14th tee – all our prayers were being answered! A wonderful tee shot at the 14th put pressure on her opponent and allowed her to continue on, dormie 4 up. She finally ended our pain on the 16th with a 4&2 win.
A great day! Everyone played superbly well, the caddies caddied wonderfully and spectator of the day has to go to 11 month old Larissa who cheered and clapped at all the right moments!
The whole team looks forward to seeing you all offering your support over the next 2 days. If Larissa can do it…………..
Results:
Foursomes
Karen Marshall & Wendy Nicholson beat Fiona Hastie & Elaine Moffat 5&4
Kate McIntosh & Rachael Watton beat Susan Jackson & Karin Sharp 1 hole
Louise Fraser & Claire MacDonald lost to Lorna Fury & Lynda Dyball 5&4
Singles
Rachael Watton beat Susan Jackson 3&2
Wendy Nicholson lost to Fiona Hastie 5&4
Kirsten Blackwood lost to Karin Sharp 2&1
Gabrielle Macdonald lost to Elaine Moffat 2&1
Louise Fraser beat Rachel Hanlon 4&3
Karen Marshall beat Lorna Fury 4&2
Stirling & Clackmannan beat East Lothian by 5 games to 4
Inter-County Matches – Day 1