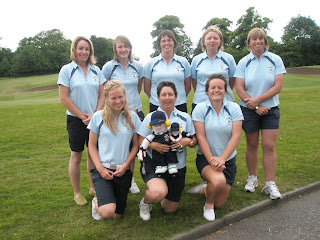 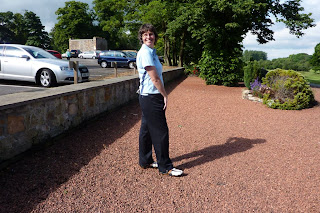 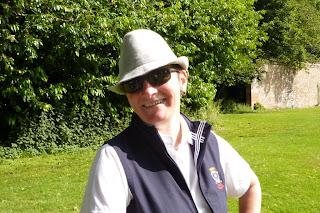 Another great day in East Lothian with the sun shining, Royal Musselburgh Golf Club again in great condition and the golf spectacular. The Midlothian Team, after another good night’s rest, were well prepared and totally focussed on the task in hand – to win against Stirling & Clackmannan.
First out in the morning foursomes was Louise Fraser and Rachael Watton and what a top pairing they proved to be! The caddies started feeling sorry for the opposition as there was nothing they could do against the brillinace and might of the Midlothian players. Birdie after birdie was scored and after not too long a time, the first point was in the bag – an 8&7 win. The “tinies” were put out together in the second match and met none other than former Midlothian member, Jennifer Bryans. The pair started solidly and kept the game very close but suddenly Stirling was ahead and kept piling on the pressure until the “kids” went down 5&3. Next came the stalwart pairing of Karen Marshall and Wendy Nicholson, again with the “dream team” caddies. Today the caddies did not have to resort to any verbal or violent threats and the girls just kept plugging away. Having gone 4 up early on and staying at that score for quite some time, they decided that variety was the spice of life and a change of score was needed to keep the supporters happy. This they did by losing the 11th to go back to 3 up but having realised that the supporters were certainly not happy with that move, they won back the 12th and went on from there to win the game by a 5&4 margin. So lunchtime was another happy occasion with a 2-1 lead.
The afternoon singles saw Rachael take on Stirling youngster Alison Goodwin. After a rocky start, Rachael knuckled down, gained the lead and never looked back, taking the game by 3&2. Next up was Kirsten Blackwood who had a terrifically tight game, battling as hard as she could the whole way but finally losing by 1 hole. Gabrielle again met ex-Midlothian member, Jennifer Bryans, and took the opportunity to gain her revenge. Playing excellent, faultless golf, Gabrielle found herself dormie 3 up. A slight hiccup at the 16th, saw her down the 17th where she shook hands on a 3&1 victory. Wendy was 3 down on the Captain, Linda Allan after the first 4 holes but was not about to give in. She battled back and before long news was out that she was 1 up and very much back in it. However, all square after the 16th, she lost the 17th and headed to the 18th tee dormie 1 down. A great drive was followed by a great approach shot and an even better putt to win the hole with a birdie and half the match. Meanwhile, Louise and Karen were quietly getting on with their business. The Captain’s and supporter’s nerves were begining to get the better of them. Where was the last point going to come from? Were we going to fall at the last hurdle? But no, the back markers had other ideas, rose to the challenge and, after teasing us all, brought home another 2 points, Louise wining by 2&1 and Karren by 3&2.
Another fabulous day which, at times, put us to the test! But all is now set for tomorrow. A victory against East Lothian and yet again, we will be the East Division County Champions.
Todays results:
Foursomes:
Louise Fraser & Rachael Watton beat Louise MacGregor & Alison Goodwin by 8&7
Gabrielle Macdonald & Kate McIntosh lost to Karen Burns & Jennifer Bryans by 5&3
Karen Marshall & Wendy Nicholson beat Vicki Stevenson & Linda Allan by 5&4
Singles:
Rachael Watton beat Alison Goodwin by 3&2
Kirsten Blackwood lost to Karen Burns by 1 hole
Gabrielle Macdonald beat Jennifer Bryans by 3&1
Wendy Nicholson halved with Linda Allan
Louise Fraser beat Claire Capocci by 2&1
Karen Marshall beat Louise MacGregor by 3&2
Inter-Counties – Day 2