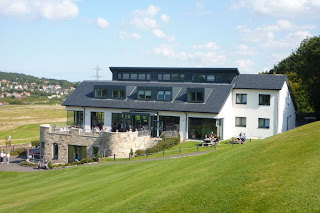 Commiserations to Rita Dee! Rita played in the Autumn Meeting today at Swanston New Golf Course and was ecstatic after her round – not becuase she was in the winnings but because she had played out of her buffer and, with her handicap curently at 9.4, would go up 0.5 and would therefore be off a playing handicap of 10. However, on checking her card it was pointed out to her that she would be handicap corrected at one hole by 2 strokes which would take her into her buffer if the CSS were to remain unchanged. But there was still hope! A few good scores were already in and a few more could cause a reduction in the CSS. Well, apologies Rita, the good scores were not enough to affect the CSS and it remained unchanged at 70. Better luck in the next medal!
But back to the day. At 7.15 am your Captain approached Swanston New Golf Club to find it shrouded in mist. Panic ran through her – it was going to be postponed; it might even be cancelled; after the fiasco with the Summer Meeting this was all Midlothian needed! But no sooner had everything been unpacked from the car than the mist lifted and left one of the best days of the year – hardly a breath of wind and temperatures in the high teens – far better than either of the Summer Meeting days.
And so the players took to the course, being led by none other than County Champion Linda Caine. Playing to her handicap and returning a score of 75, she not only led the field on the course but she led the scratch scoring from start to finish and wins the Lady Ford Cup. Suzie Laughland was also an early starter and after a lot of discussion as to whether she was going to enter the 2’s sweep or not and how she never ever has a 2 but today might just be the day and if she didn’t enter…………… she returned to the clubhouse, all smiles, not just because she was in the money for scoring a 2 but because she had had a tremendous score of net 65 which held all day to win best overall net. Two more sub-par rounds were recorded, one by Vivien Mitchell who wins best scratch in the bronze section (having done the same last week in the Summer Meeting) and the other by Fiona Findlay who wins 1st handicap in the silver section, both recording net 68s. A slight jump was then needed, but only to net 71 to find the the winner of the bronze handicap, Winnie Wilson, and the second best net overall, Gillian Pritchard, while a net 72 won Pat Meikle 2nd handicap in the silver division on a count back.
Well done to all 58 ladies who turned out to play. Yet again, there were 3 ladies who were non-shows. What happened to you? Where did you get to? Unfortunately the Captain, Vice-Captain and President did not take to the course but the general feeling was that everybody enjoyed themselves, the course and, need I add, the weather! Our thanks go to all at Swanston who made it a great day and who looked after us so well, to all who brought a prize for the raffle table and who bought raffle tickets. The raffle raised £91.50 which, as ever, will be put to good use with the County Juniors.
The results were as follows:
CSS 70
1st scratch and the Lady Ford Cup: Linda Caine (Dunbar) – 75
2nd scratch: Ruth Brown (Lothianburn) – 78
Best net overall and the McIntyre Trophy: Suzie Laughland (Royal Dornoch) – 79 less 14, net 65
2nd net overall: Gillian Pritchard (Ravelston): 87 less 16, net 71
Silver Division
1st handicap: Fiona Findlay (Lochend) – 88 less 20, net 68
2nd handicap: Pat Meikle (Lochend) – 88 less 16, net 72
Bronze Division
1st scratch: Vivien Mitchell (Prestonfield) – 91
1st handicap: Winnie Wilson (Ravelston) – 96 less 25, net 71
There were 6 2’s today, each winning £9.00. The 14th proved the most popular hole with 2’s by Muriel Gilligan (Swanston New), Diane Moncrieff (Lochend) and Lynda Taylor (Dalmahoy). Katy Gillies (Melville) got hers at the 5th, Coleen Derighetti (Lochend) at the 9th and Suzie Laughland (Royal Dornoch) at the 17th.
MCLGA Autumn Meeting