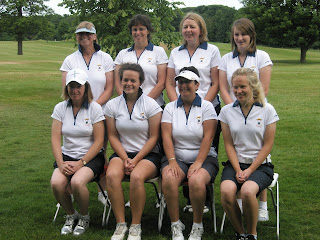 Midlothian took to the final day of the Inter-County matches knowing that a draw was all that was needed to see them through to the County Finals at Bothwell Castle in September and knowing that such a victory would thrill the County Treasurer!
With the target of a 9-0 win, the foursomes pairings were decided. We would stick with the same successful start as yesterday and play Louise Fraser and Rachael Watton at no. 1. We would follow that up with a slight change and play Gabrielle Macdonald with Kirsten Blackwood. Our third pairing would be the stalwarts and the dream team i.e. Wendy Nicholson and Karen Marshall with caddies Fiona Smith and Margaret Ritchie. The idea was for all of the games to have been won before having to climb up the hills at the 15th, thus conserving all of the players energy and the officials nerve capacity. This, unfortunately, was not to be the case. The first match proved to be very tight and it took Louise and Rachael until the 17th to notch up the first point. Kirsten and Gabrielle were up all of the way with brilliant iron shots that peppered the flag and fantastic putting. Having found themselves dormie 3 up, they eased home, with a half at the 16th, to a 3&2 win. Karen and Wendy had only played 14 holes together in the previous matches and finding themselves 4 up on the 14th tee, were planning a repeat performance today but it was not to be! The pin on the 14th was in an extremely tricky position – hard left, just over the brow of a hill. Having watched the other 2 games 3 putt the green because the first putt just kept on rolling, the Captain passed on this info. Karen hit a tremendous tee shot, pin high and on the left hand side of the pin – which left an uphill putt! The opponents were short and right – an impossible position. A good putt from the opposition just kept on rolling and they hadn’t lost their turn. However they stepped up to the next shot and ……. bang, it disappeared into the hole. Wendy then eyed up her putt and …. bang, it was on it’s way ……. it hit the lip and ….. stayed out. Doom and gloom, the girls were dormie 4 up but had to go up the 15th. Unfortunately the 15th was lost but the girls hung on won the 16th and the match by 4&2. So another good, realxing lunch was had by all.
Or so we thought until we came out for our afternoon games! Where was Michaela? Why was she no longer on the trolley where she had been left to keep a watchful eye on all the equipment? She had been mugged by an unknown and taken into hiding. But the detectives found her …….. up a tree! 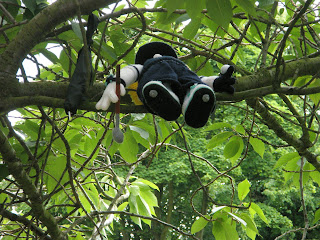 Needing 2 points in the afternoon to win the match and the Inter-County title for 2010, it was decided to give Kate McIntosh a taste of Inter-County golf singles and play her at no. 4. Boy what a secret weapon she proved to be! She was given none other than Broomieknowe stable-mate Wendy Nicholson as caddy and what a singles dream team they made! 2 up after 2 holes, she never looked back. 4 up after 8 holes, 5 up after 9 holes, 6 up after 11 holes … things were really hotting up! She then lost the 12th to go back to 5 up but after a tremendous drive at the 13th, she left her approach shot short and slightly to the right of the green. What a pitch she had to about 10 ft and, having watched her opponent reach the green in 3 and then 3 putt, she rolled in her putt for a birdie 4, to claim her first singles point for the team by 6&5. There was then a sudden dash to the 14th green where Kirsten, playing no. 3, was sitting dormie 5 up. Her tee shot had gone to the very back of the green but an immaculate chip got her up and down for a par 3 and she claimed her tie by 5&4. The celebrations had started but there were still other games to watch. Louise, playing no. 5, was next to appear at the 14th, 4 up. She left her tee shot right of the green but a fabulous chip rolled up to just short of the pin. Her opponent then 3 putted. Louise stepped up, holed her putt and won the match by 5&4. News had filtered back from the 16th green that Gabriell, lpaying no. 2, had lost the hole to return to 1 up. After a huge drive, the adrenaline rush made her hit her approach shot over the back of the green. Her opponent had taken 4 to reach the green. Gabrielle hit another fantastic chip to just short of the cup and sank the putt to win the tie 2&1. While all this was giong on, Rachael was in a real battle which was up and down all the way. With 5 points out of 5 scored so far, she was determined not to drop anything. She reached the 18th all square and hit a huge tee shot and a lovely chip onto the green. Her opponent putted first and left the ball dead – a 4. Rachael prowled around her putt and finally took her stance. She sent the ball on its way but it ran out of steam half a roll short of the hole. She had to settle for a 4, a half and a grand total of 5.5 points. Karen was equally well in some battle at the back of the field. One up on the 14th, she missed the green left and lost the hole to go back to all square. She halved the 15th and at the 16th made a fantastic up and down to save par and gain another half. After the 17th was halved, Karen launched a huge tee shot down the 18th. Both girls then reached the green in 2, her opponent hitting a wonderful wood into the green and had the first putt. LEaving the ball short, Karen stepped up to her putt. She struck the ball and left it right on the edge – a 4 was conceded. The opponent, with nerves of steel, stepped up and slotted her putt for a halved match.
But Midlothian had won by 8 games to 1, which brought the Inter-County trophy back to Midlothian for the second year in a row! 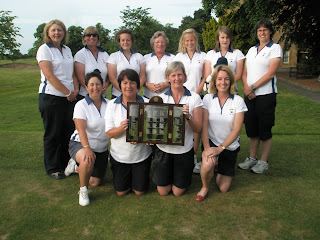 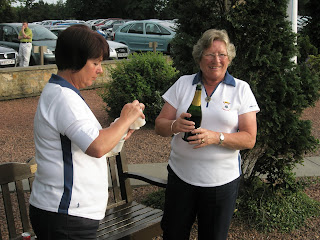