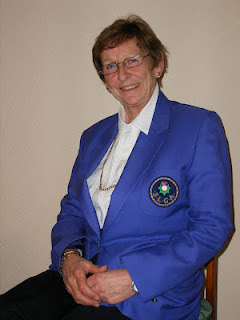 It is with great sadness that we announce the death of Ethel Jack:  Honarary Member, Past Captain and President of Midlothian County, a dear friend to so many, and a character that no one will ever forget.  Ethel’s sense of humour, fun and wit was renown and Scottish and Midlothian golf will be a sadder place without her.

Ethel was President of the Scottish Ladies Golfing Association from 2007-2010, Chairman from 1979 to 1981, and was one of a small group of individuals whose contributions to ladies golf are recognised by the appointment as Vice President of the Association.
She was a member of Prestonfield Golf Club and a member of Gullane Ladies’ Golf Club since 1957.  Ethel represented Scotland as a player at girls, women’s and veteran’s level.
She was a past captain of Gullane Ladies, Midlothian County Ladies (1971-72) and the Scottish Veterans among others, and has been President of Midlothian County (1993-95) and the Scottish Veterans (1995).
Ethel served as a handicap adviser and as Scotland’s representative on the Ladies Golf Union’s Standard Scratch Score Committee for many years.
Ethel led her county and played representative county golf for many years.  She was county champion on five occasions between 1959 and 1990.  She also was a great supporter of the county and junior girls golf.

She had a fantastic sense of humour and fun.  Many were the anecdotes and stories she could tell about her days playing county and international golf.  For example cycling to county matches, and persuading a well-known retailer to provide uniform for the Scottish Team first sent to play in the European Ladies Team Tournament.

Ethel had been suffering from lung cancer since last summer, and despite treatment, she finally succumbed at the Eddington Hospital, North Berwick, this afternoon. The end was quick and peaceful, just as we all wanted it to be. She was pre-deceased by her husband, Philip,  and leaves behind her sister Doris, her nieces Catriona and Suzie, and nephew Graham.
We will all miss you Ethel.
Ethel (1939-2012)