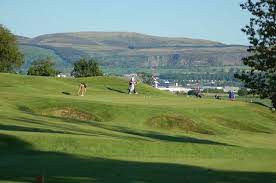 The final County competition of the year is the East of Scotland Division Championship.  This year it was hosted by Midlothian at Turnhouse GC on 16 October.

We awoke to torrential rain which fully cleared prior to the first tee time at 9am and what followed was a day of wall to wall sunshine. However, it wasn’t quite as perfect a day as it sounds. Turnhouse wouldn’t be Turnhouse without a touch of wind and the wind blew as hard as the sun shone, presenting very challenging conditions for the players.  This was coupled with very slick greens which caught a few players out.  All in all, great but challenging, conditions for play.

The competition attracted 96 entries, 11 withdrew, mainly for a range of health reasons, leaving a final playing field of 85 of which 41 represented Midlothian. Some varied scores returned within the field due to the conditions but as always, there were some great scores shot.

Midlothian more or less had a clean sweep across all of the prizes with only one being won by a non-Midlothian member. Congratulations to:

Kate McIntosh (Broomieknowe) who is East of Scotland Champion 2022 🏆💪🎉👏👏

Team Midlothian (Kate McIntosh, Rachael Livingstone, Karen Ferguson-Snedden and Karen Marshall) for delivering a convincing win for the Team Competition (where 3 of 4 scores count for the 4 players nominated before play).

On behalf of East Division, we extend our grateful thanks to Turnhouse GC for providing courtesy of the course and being incredibly helpful and supportive to Midlothian in their hosting and organising of this prestigious event.  The Greens Staff had done an exceptional job in preparing the course, the bunkers were beautifully raked and only 4 were out of play following the torrential rain.  The greens were immaculate, very fast and a delight to putt on, although they did catch a few people out!  The course was closed until after all competitors had teed off so pace of play was good with only a slight hold up at the blind 3rd hole. The Bar and Catering staff looked after us all very well and there was a lovely energy in the Clubhouse. Club Captain, Oliver McCrone, opened the prize giving and supported me in  presenting the prizes.

As hosting County and Captain, I’d like also to extend my grateful thanks to our volunteers on the day: President Sheila Stuart, for being available all day as contactable Referee, Turnhouse members, Liz Calder, Yvonne Wilson and Maureen Joyce for supporting us with the registration and results desk, Lochend members, Coleen Derighetti and Fiona Findlay for providing support with VMS, and Secretary, Angela Hughes and Treasurer, Mary Stark, for supporting me in ensuring the day was a success. Thank you all 😊

Thanks also to the other East Captains: Gail McKill (East Lothian), Alison Davidson (S&C) and Elsie Hutcheon (Fife) for their support in leading up to the event.

Full results are available on the Scottish Golf App with Gross Results available here and Nett Results here.  The main prizes are as follows: