There were 49 couples entered into the Winter Foursomes 2018/19 and we now have our worthy winners. A hard fought battle in the quarter finals when Coleen Derighetti and Jaci Moriarity were 5 down with 5 to play against Margaret Alexander (Baberton) and Muriel Gilligan (Swanston). The quarter final went to the 5th extra hole before Coleen and Jaci could steal a win from their opponents. The Final against Helen Ross and Maggie Pringle (Turnhouse) could have gone either way. Coleen and Jaci were again down, but this time by only 3 holes with 3 left to play. Jaci decided to start holing putts and the match went all square and down the 19th where the deadly Lochend Duo stole another win from their opponents. Congratulations to Coleen and Jaci. ☃️🏌️‍♀️⛳️🏆😃 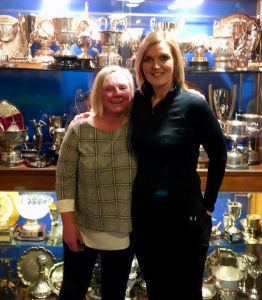