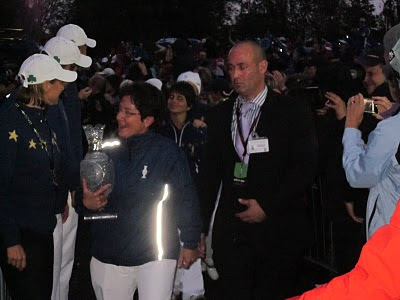 There have been lots of things happening over the past week when the webmaster was at the Solheim cup in Ireland, along with quite a few Midlothian members. Congratulations to the European team who were obvioulsy inspired by the Midlothian win at the Scottish County Finals! Its certainly been the year for comebacks. I was lucky to get close enough for this photo of Alison Nicholas as she left the stage with the trophy.

Rachael Watton who is now at Denver University, Colorado, making only her second competitive appearance since she moved across the Atlantic, finished T9 in a field of 93 at the Dick McGuire Invitational at the University of New Mexico.

The winners of the Greensomes league will be announced soon as there is one re-arranged game still to play.