What another magnificent day with wall to wall sunshine. Better than over there in Heidleberg!!

Our Happy team below did us proud by winning 7.5 to 1.5. Some tense matches but we really have such a tenacious team that even when you think the tables have turned they manage to fight back. 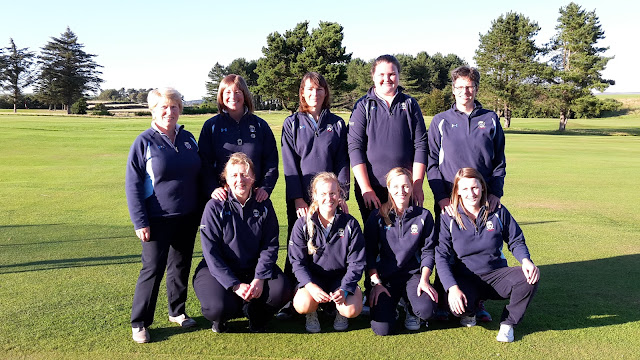 We were out again at 09.30 and although there was a lot of dew on the ground the sun soon dried the course out.

Karen and Hannah followed but never quite got totally in the groove. They were one down going up the 18th which meant  a bit of nail biting but an excellent shot to the green and good put let them half the match .

Gabrielle and Louise were going really well in the first few holes to take them to 4 up by the 5th. They maintained this lead until the 10th when their opponents really started to put on the pressure. Again down to the wire with a win on the 18th.

Pressure on now to see what our singles players could achieve on a glorious afternoon.

Kate seems to have a tiger in her tank this week. She played briliantly to win 5/3.
Karen Marshall found her form again in the afternoon and was soon 4 up. Pressure from her opponent meant she ended up going up the 18th to win us another point.
Alison had a shaky start playing with water in the first few holes . She was 4 down coming down the 14th and won the next four holes to half the match. Brilliant come back.
Karen Ferguson was up for most of her round only having a hiccough towards the last few holes and ending up halving the match on the 18th.
Wendy was on great form this afternoon against a formidable opponent going three up at the 15th then winning the 16th . Winning the match 4 and 2.
Hannah was our backstop this afternoon and coped really well with that pressure. She was up from hole one and completed a great match on the 16th to win 3 and 2.

Overall another great day with lots of smiles on faces. A huge thank you to all our caddies who are doing a great job looking after the players.

Kate’s shot of the day today was unfortunately her provisional when she hit it close to the pin with her drive on the 5th!

Another shot was a carefully thrown banana skin which may take some time to come down from where it is hanging in the trees!

Hope the forecast is wrong tomorrow but know our team will fight every inch of the way to bring home the trophy.

The second day at Stranraer playing against Ayrshire