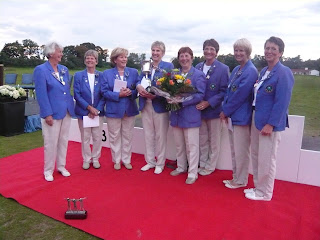 Congratulations to the Scottish Seniors who yesterday won the European Senior Women’s Amateur Team Championship at Sporting Club, Berlin. Having won through to the final, the girls were due to play England, the no. 1 seeds who had led the Scots by 48 strokes after the qualifying stroke play. But the Scots were not to be fazed and brought home the gold medal for the first time by a 3-2 margin.

Many congratulations! A fantastic result and we can only imagine what the celebrations were like!