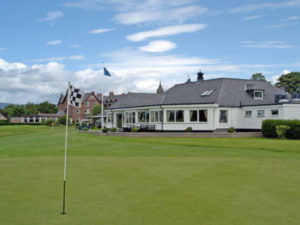 Congratulations to the Midlothian players who qualified for the Senior Amateur Matchplay at Edzell this week. Conditions were a bit damp for everybody in round 2 but players still managed some great scoring. Elaine Moffat from St Regulas Ladies GC won the 36 hole strokeplay championship with a gross total of 150. Tied 11th on 161 was Caroline Steedman from Murrayfield and Jennifer Bryans from Harburn. Morag Wardrop and Isla McCrone both from Turnhouse qualified for the net matchplay and were competing against each other in the first round! The top 16 players qualified for the matchplay and net matchplay championship. Wendy Nicholson Baberton, Karen Ballantyne Craigmillar Park, Sal Shepherd Craigmillar Park, Mandy Dougal Baberton, Fiona Thorburn Baberton, Frances McFadzean Craigmillar Park and Gilly Glen Craigmaillar Park also played in the strokeplay qualifying event.

Turnhouse players Morag and Isla battled it out in round 1 of the Net Matchplay. Isla won through to the quarter finals but was then beaten by Sandra Littlejohn from Erskine GC who then went on to win the final against Fiona Scott from Bothwell Castle. In the main Championship Matchplay Caroline Steedman lost to experienced Donna Jackson from Troon on the 17th hole in round 1. Donna then went onto play in the final and be runner up to the Champion. Jennifer Bryans beat both opponents Sandra Dickson from Royal Dornoch in round 1 and Alison Davidson from Stirling in the quarter finals 4 and 3. Jennifer Bryans played well in the semi finals against strokeplay champion Elaine Moffat and although lost out 5 and 3, Jennifer displayed some great bunker shots and chipping to ‘gimmie’ distance in her steady game.

Scottish Senior Amateur Championship Round Up