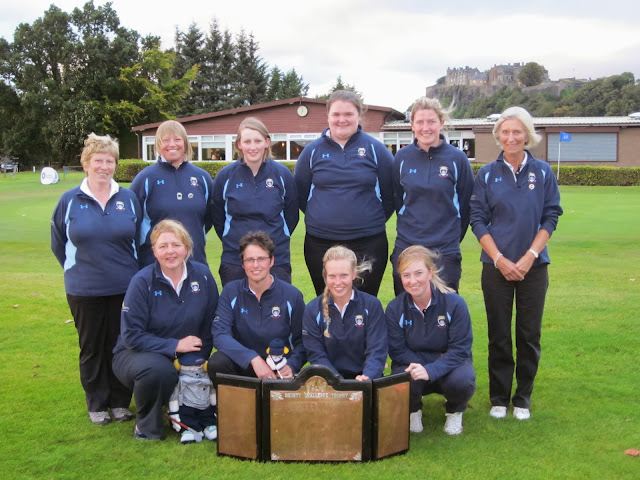 Congratulations to Captain Sheila and the Midlothian team! Winners of the Scottish County Finals by the smallest of margins.

The story of Day 3
We started the day knowing that we needed an 8-1 win, at least, over Borders to put  us back in the frame. Then all we could do was hope for a 5-4 victory by Renfrewshire over Aberdeenshire.

Mid morning, things weren’t looking good, as although Wendy and Rachael were on fire in their match, we were down in our other 2  matches. Gabrielle and Louise managed to dig deep and secure a win but, the thus far unbeaten duo of Emily and Kate struggled with their form and enabled Borders to deservedly win the 3rd match. By lunchtime we were 2-1 up but needed to win all 6 singles ties in the afternoon to be in with a chance.

Gabrielle took an early lead over Tara before Tara found her form to bring the match back to all square.
The 2nd match out between Rachael and Dani was a closely contested affair. Meanwhile Emily and Kate, reinvigorated after the morning and knowing what they had to do, just got better and better and secured clear early wins. No-one doubted that an on form Wendy would play her part which she did with a convincing 6 and 4 win. So we took an early 3-0 lead.

Gabrielle then pushed ahead and being up going down the last secured a clear win by holing a massive put on the 18th. Meanwhile Rachael suddenly seemed to be inspired and show us the golf that we knew she was capable of, to secure a 2 and 1 win over Danni Ker. So now it was 5-0.

Who better to rely on to perform when the pressure is on but Karen! One up going down the 18th and a stunning pitch from the right rough to the green and we knew it was in the bag!

The waiting until the count back was completed seemed endless. Then to add to our discomfort the organisers waited until all their carefully prepared speeches and thank yous were over before announcing the result!

What a great advertisement for County golf!

Well done girls – you thoroughly deserved it in the end for the way you stuck in there and fought to the bitter end. But commiserations to Aberdeenshire – you really deserve a share of the trophy.

Thanks to Stirling golf club for their hospitality and thanks to Dawn and Toni and all their helpers and referrees for an excellently organised event, and to all the County Players not only for their wonderful golf but for the impressive spirit in which the golf was played.