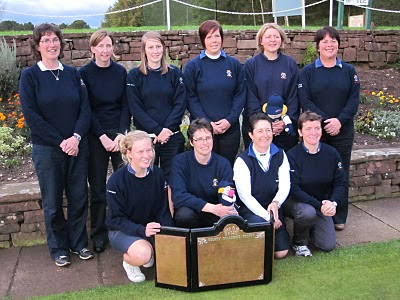 Well we woke up this morning and thought did that really happen? Its just starting to sink in – Midlothian are Scottish County Champions! It was a fantastic 3 days and a real team effort. The players were totally committed, everyone contributed and dug very deeply when it was needed. The caddies were brilliant and the team really appreciate their support, especially in all the inclement weather they had to cope with. The team spirit and commitment was next to none.

Thanks to Vice Captain Caroline who organised all the caddies and the captain, Secretary Agnes who did all the important things like organising all the meals and munchies, and selector Linda for her sound advice and sense of humour.

Thanks also to Lynne and Terry at the Huntingdon Hotel who looked after the team so well, charging batteries, drying out clothes and shoes, and even getting up to make us breakfast at 6.30 am on the final day! They were fantastic and come highly recommneded if you ever want a golfing break in Dumfries!