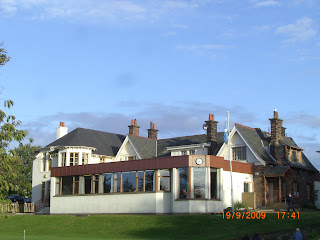 After the floods of July, the Summer Meeting was finally played at Baberton Golf Club today. The weather was so much better – but let’s be honest, it couldn’t have been any worse – unless the snows of February had returned! But having said that there was still some rain, fairly heavy at times. However today’s rain brought only 1 couple in early from their round not the 15 or 20 odd couples who gave up in July. There was even the odd lucky pairing who turned up in the rain, hummed and hawed about whether they were going to venture out and then finally decided to brave the conditions, only to get round in complete dryness.

Anyway, 63 ladies were able to make the rearranged date, with the early morning weather forecast putting off an additional 7 entrants on the day. Scores were fairly high to begin with and it took until the 10.15 am tee off time until we saw the first of our winners – Kate Johnston who led the silver handicap until Marge Gammie came in immediately behind, pipping her at the post by 1 net shot. The heavy downpours and the threat of the greens flooding did not put off our 11.45 am and 12.07 pm starters, with Nook Weir returning a net 74 to claim the Bronze handicap prize and Vivien Mitchell returning the best Bronze scratch. After the rains came Sarah Stitchbury (she of the aforementioned indecision!) with an excellent scratch 79 which held its own until late into the evening when late starter Wendy Nicholson upset the entire competition and is probably the one responsible for all the 0.1 increases, returned an even better 1 under par 71. The evening tee times also saw Janet Graham claiming the best net overall and, last on the course, Collen Derighetti collecting 2nd overall net.

Our thanks go to Maggie McPherson who made sure the Starting Committee were exceptionally well settled into their table and the catering and bar staff who took over from Maggie ensuring our food and liquid requirements were met. Also a big thank you to all who brought along a raffle prize – the table was groaning with all that was on offer – and to those members who bought a ticket. The raffle raised £99.50, which again will be put to good use with the County Juniors.

The results are as follows:

Thank you to everyone who persevered while we tried to rearrange the day and to those who were able to play and support Midlothian.