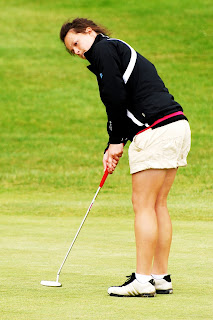 While 14-year old Loretto School girl Julie Yang took 7 shots off the Murrayshall course record in becoming the 2010 Paul Lawrie Scottish Schools Champion, the Midlothian players also put up great performances. Hannah Scott (Broomieknowe) was third in the handicap section after 2 fabulous rounds of 76 to the pars over the Lynedoch and Murrayshall Courses of 69 and 73, finishing overall in 6th equal position along with Rachael Watton (Mortonhall). Gabrielle Macdonald (Craigielaw) was one shot better after rounds of 73 and 78 and Kate McIntosh, one shot worse after a morning round of 78 and a great comeback in the afternoon with a 75.
Our thanks to Cal Carson Golf Agency for the picture.
Paul Lawrie Scottish Schools Championship 2010