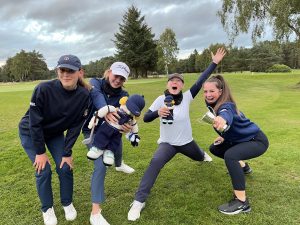 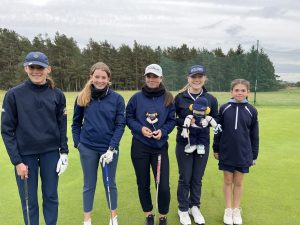 We were drawn against Fife for the morning singles which resulted in a 2/2 draw. Megan Fallon (Broomieknowe) led the way with the support of Mini Mac and brought home a 4&2 win against Abigail May and Lucy Fraser (Murrayfield) delivered a convincing 6&4 win against Carly McDonald under the watchful eye of veteran Michaela on her bag 🤣. Katie Mackenzie (Craigmillar Park) fought a tough match against Nina Fischer losing 1up and Rita Murphy (Murrayfield) battled it out with Katie Jarvie losing 4&2.  Our reserve, Alannah Nichol supported her team mates throughout the morning running on the spot now and again to keep herself warm🥶. 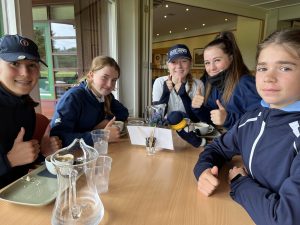 The determination of both Katie and Rita to keep fighting coupled with the wins from Megan and Lucy resulted in Midlothian winning the morning on count back and going in to the afternoon final against East Lothian, who also beat Stirling & Clackmannan on count back.

After a very spicy soup and sandwiches the girls headed out on to the tee again with Katie and Rita in charged of Michaela and Mini Mac! 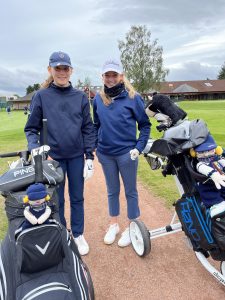 The final didn’t disappoint either with Megan leading the girls out against the talented Evie McCallum.  Megan was up for the challenge and managed to give Evie a great match and after a few stray shots off the tee in the last few holes, Evie secured the win.  Katie took on Ellie Brent and took immediate control of the match but Ellie started to fight back. Katie kept pushing but eventually lost on 4&3. Both Lucy and Rita brought home strong wins to bring us to a draw again. As we quickly did the count back Midlothian emerged the winners!

We are extremely proud of the girls fantastic team effort – they played wonderful golf and it was a real privilege to watch our talented young golfers. 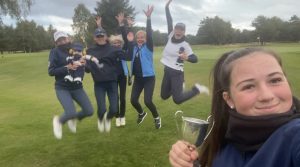 The standard of golf overall was impressive and it is wonderful to witness the future of East of Scotland Division and the Counties within it, as the girls stepped up to the competitive challenge and enjoy their matches in great spirits.  The final result was Midlothian (winners), East Lothian (runner up) Fife (3rd) and Stirling and Clackmannan (4th).

Many thanks to Fife County for hosting us so well at Ladybank.

Midlothian is hosting the 2023 Cuthbertson Cup at Turnhouse Golf Club on Sunday 24 September.

Our Junior Girls do it again!