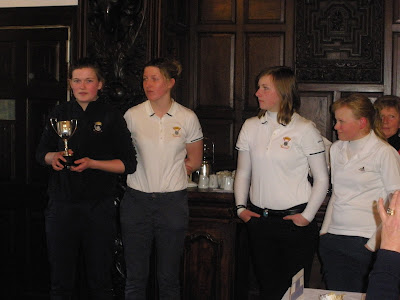 The wet and dismal weather did nothing to dampen the spirits of our Junior team who played some spectacular golf to win the Cuthbertson Cup on Sunday at Dunfermline Golf Club.Congratulations to our team of Emily and Jessica Dalgetty, Eilidh Crawford and Kirsty Burgess.
In the morning we played Stirling and Clackmannanshire. Jessica secured an early lead and went on to win  8 & 7 over Catherine Goodwin. In the second half the other matches could have gone either way but Emily found her form to achieve a 3 &;2 win against Andrea Walker.
Behind, both Eilidh and Kirsty fought hard to secure valuable halves to ensure our team won 3 -1.
In the afternoon we were up against holders , East Lothian. Emily led from in front securing an impressive 5 -4 win against Charlotte Munro. Big sister, Jessica fought hard to keep on level terms with Joanne Free and then to edge ahead to win 1 up.  Eilidh, despite her youth, displayed a mature and gritty determination against Jennifer Allan to secure a 3&2 win. No-one watching her was in any doubt that she was there to win!
Kirsty fought hard in an up and down match against Beth Donoghue displaying some stunning golf and getting herself out of some tricky situations. She was unfortunate not to maintain her lead of one up at the 18th to end up halfing her match.
All games were played in a very friendly spirit and everyone enjoyed themselves.
Many thanks to all the families, friends and supporters who came to watch and thank you to Dunfermline Golf Club for their hospitality. 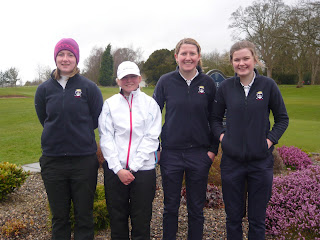