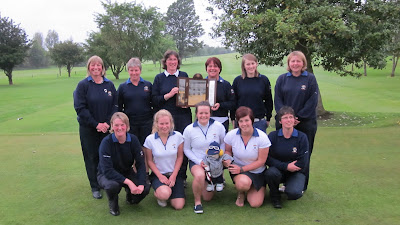 We did it but boy was it tight. This morning did not go well. We lost the foursomes 3-0 to Fife and were really up against it. We got together at lunch time and re-grouped. It was a big ask to win at least 5 singles matches, but we went out with the belief that it was possible, and we would at least go down fighting. Jane Turner, out first, seemed well in control and was 3 up with 3 to play. She gave us all a few anxious moments as she headed down 16, then 17 and finally 18, but came good in the end. Karen Marshall was always up against it playing an in-form Susan Jackson, and eventually lost on the 16th after a great battle. Rachael Watton and Kate McIntosh were always in the driving seat wining their games 5&4 and 4&3 respectively.

It seemed all over – Louise Fraser was 2 down for most of her game and Gabrielle Macdonald 3 down. Word came back that Gabrielle had got one back and we could see her bouncing along with a spring in her step again. Then Louise staged a comeback to be all square playing 18. Surely it wasn’t possible was it? When Louise won the 18th all eyes turned to young Gabrielle, who had just squared her match on 15 only to loose the 16th. They think its all over … came to mind but Gabs had different ideas. She won 17 and standing on the 18th she asked her Captain what the situation was, to be told not to worry about that. But she insisted on knowing and with a look of determination she off she went and won the match!

What a day, what a team! Midlothian Ladies – be very proud of your team. They were fantastic this week and today in particular. They played with passion and determination and we are all back home still in a slight daze, not quite believing what happened out there and that we have managed to win the East Division title for the 3rd year in a row.

Thanks to the Fife team for a fantastic game played in great spirit – we are sorry someone had to loose it. Thanks to Caroline, Linda, Agnes and Janet for all their hard work and support this week and to all the caddies – we couldn’t have done it without you all! 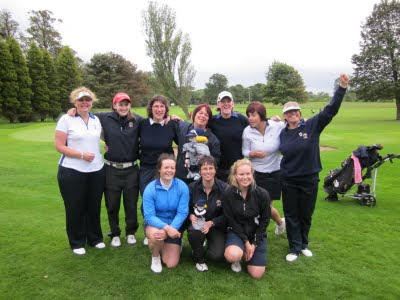