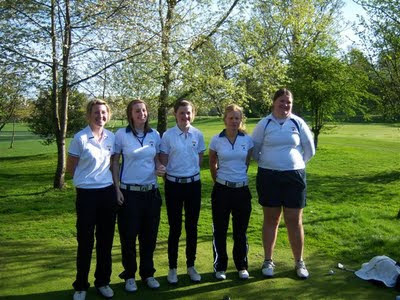 Our girls did Midlothian proud yesterday in their attempt to retain the Cuthbertson Cup for a record equalling sixth year in a row. In the morning Midlothian were up against Stirling and Clackmannanshire. Captain Gabrielle Macdonald got the team off to a flying start with a 4&3 win over Alison Goodwin and Hannah Scott beat Tiffiny Wood 6&4. Meanwhile Kate McIntosh was having a battle with Alexis Hutton who was holing putts and chips from everywhere. All eyes turned to newcomer Jessica Dalgetty in her first Cuthbertson Cup game and first real experience of playing at this level. We didn’t need to worry. She seemed to grow in confidence with every shot, and with sister Emily playing every one of them with her from the sidelines, she recorded a resounding 7&6 victory over Jennifer Allan. Hearing all this news from the other matches, Kate, not to be outdone, fought back from 3 down to eventually square her match on the 18th.
The afternoon was always going to be tough. East Lothian, having beaten Fife in the morning, had a very strong team. Once again Gabrielle led from the front, dispensing with Lesley Atkins 4&3. The others were really up against it and despite some sterling efforts and fight backs, Kate and Hannah eventually lost to Clara Young and Keren Ward. All eyes turned once again to young Jessica. Having been four down to Rosie Everett, news of a come back came in, 3 down, 2 down, 1 down .. could she do it? She held her nerve, but Rosie was just too strong and a great approach shot to the 17th finished it off. 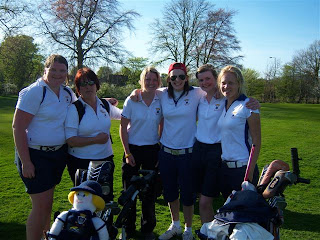 An exhausted and disappointed team left a very sunny Tulliallan still smiling, and gracious in defeat. We are proud of how you all played and conducted yourselves girls. Congratulations to our neighbours East Lothian, you deserved it this year, but we will be fighting hard to get that trophy back next year!

Many thanks to everyone who supported the girls on the day and especially to Caroline McIntosh, Sandra Hennessy, Karen Marshall, Agnes Lesley and Janet Wake for all their help.