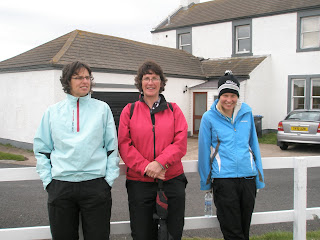 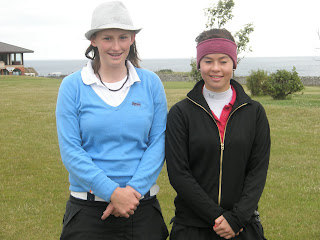 Kate and Lesley Atkin on the first tee being cheered on by the supporters!
What a week it has been at Eyemouth Golf Club in the Borders where the Scottish Girls (Close) Amateur Championship was being played. Although dry, the girls had huge winds to contend with and, when news of the Open being delayed at St Andrews due to the wind was relayed, the word “wimps” was heard around Eyemouth! The quarter finals saw 3 of the 4 Midlothian players still in contention, no. 1 seed Rachael Watton playing no. 25 seed Kate McIntosh and Gabrielle Macdonald, no.3 seed, playing the number 6 qualifer. The results saw Kate and Gabrielle progress to the semi-finals with 3&1 and 3&2 wins respectively. Having despatched with the top qualifier, Kate met no. 4 qualifier in the semi-final while Gabrielle had to take on no. 7 qualifier, who was totally lethal on the greens! Unfortunately, after battling away, Gabrielle had to bow out at the 17th where she lost 2&1. Kate, however, played magnificently and did not allow her opponent a look in as she marched to a 6&5 win. And so to the final in which Kate was taking on Lesley Atkin (Gullane), victor against Gabrielle. Kate started well with a magnificent putt at the first hole to score a birdie and take the lead. That was short lived as Lesley immedately won the next 2 holes to go 1 up and remained so until going 2 up on the 8th. Putt after long putt was again holed by Lesley as she stopped Kate getting back into the match. Kate started catching bunkers and before she knew it she was on the 14th hole and 4 down. The match was finally ended on the 14th as Lesley sank yet another long putt for a birdie and a 5&4 victory.
In the Ansley Reid Salver, Hannah Scott fought her way gallantly to the final. There she met on form, Fife County Team member, Rachel Hanlon, who won the match by 3&2. 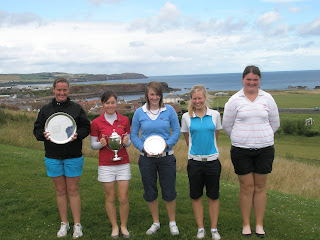 An excellent display by all of the girls who all played exceptionally well. Pictured above are, from left to right, Winner of the Ansley Reid Salver, Rachel Hanlon, Winner of the 2010 Girls (Close) Amateur Champion, Lesley Atkin, Runner up, Kate McIntosh, beaten semi-finalist,Gabrielle Macdonald and beaten finalist in the Ansley Reid Salver, Hannah Scott.
Midlothian does well at Scottish Girls