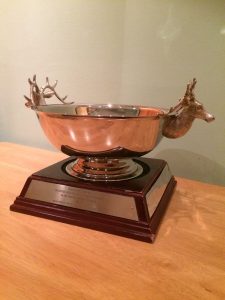 The annual SUGS (Scottish Universities Golfing Society) match was played this evening on Gullane No2. What was scheduled to be a wet evening turned out to be warm, dry but a little blowy, about a 3 club wind blowy. The locals would surely call that a mild breeze and perform their normal standard of golf. Tough but enjoyable conditions against the ever so friendly SUGS men with a hint of a competitive edge between all the players. The score was 2-1 to the SUGS and the final score would rest on the last game. The final score ended in a friendly 2-2 which meant MCLGA retained the Trophy. The Captains first Team silverware 😃 thanks to all the players.