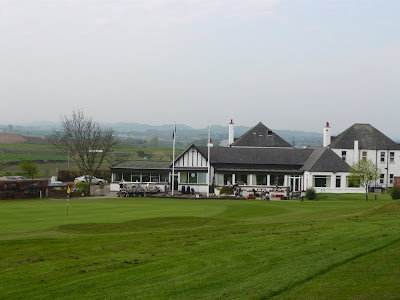 Most of today at Turnhouse was more like summer than spring, with the morning players sitting outside having drinks and lunch after their game. With the frequent sound of planes overhead, everyone felt they were on their hols! Those playing later in the day had to contend with a bit more chill when the mist descended (real mist that is) and the wind got up a little. But a great day was had by all despite a few tales of lost balls and missed putts.

Thank you to Turnhouse members and staff for all their help, especially to the ladies who helped on the desk, the Pro shop and the bar and catering staff for looking after us so well. Thanks also to those who donated raffle prizes and bought tickets – we raised £138.50 for the juniors.

The best scratch score was posted by Noreen Fenton early in the day and matched by Linda Bain at the end of the day. Noreen wins the Cormack Salver on the better inward half. A fantastic score of 91 (23) 68 was then posted by Margaret Clark who wins the CM Park Rosebowl for the best bronze scratch score.