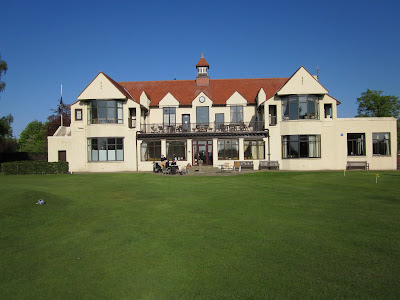 What a day we had a Kingsknowe. The sun shone all day long and it just got warmer and warmer – just look at that blue sky – it’s April! Some of the golf was pretty hot as well. First out, Rachael Watton posted a 1 under par 71, which was then matched by Karen Marshall, Kate McIntosh and Kate Rorke. Louise Fraser, disappointed by her 81 in the morning, showed her grit and determination by bouncing back with a 71 in the afternoon after both Karen and Rachael shot 70.

Rachel wins the Robertson Salver for the best scratch score on the better inward half from Karen Marshall. Unfortunately Rachael is unable to take part in the match play stages as she flies off to Cardiff tomorrow for the Welsh Open Stroke play Championship (Good luck to Rachael, and to Jane Turner and Gabrielle Macdonald all playing in the Welsh).