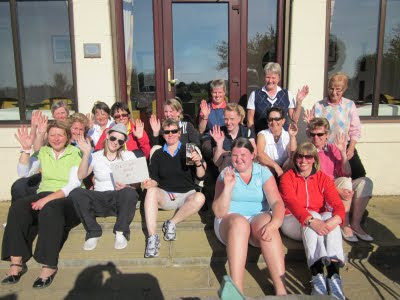 Message to Fiona de Vries – Hi from all of us – in case you can’t read the notice it says Get Well Soon Fi!

The sun shone again today at Kingsknowe but the wind grew in strength throughout the day which made the golf challenging and interesting at times. There was some great golf and some tight matches. In the morning Noreen Fenton and Linda Caine had a great tussle, with Noreen eventually winning on the 19th and the B Championship match between Janet Collin and Lesley Campbell also going to the 19th. The results were:
Karen Marshall beat Gilly Glen 6&5
Noreen Fenton beat Linda Caine 19th
Claire Hargan beat Hannah Scott 3&2
Kate Rorke beat Linda Bain 5&3
Kirsten Blackwood beat Wendy Nicholson 3&2
Louise Fraser beat Sal Shepherd 4&3
Tracy Laughand beat Arlene McGarty 4&3
Kate McIntosh beat Sarah Stichbury 7&5

In the afternoon we had some very tight matches with Noreen taking Karen Marshall to the 18th and young Kate McIntosh fighting back against past Captain Tracy to eventually win on the 18th. The results were:
Karen Marshall beat Noreen Fenton 1up
Claire Hargan beat Kate Rorke 5&4
Louise Fraser beat Kirsten Blackwood 3&2
Kate McIntosh beat Tracy Laughland 1 up

We look forward to another great day tomorrow. Come along and support if you can. The Championship semi finals start at 9 am with the final at 1pm. The B Championship final starts at 9.15 am.