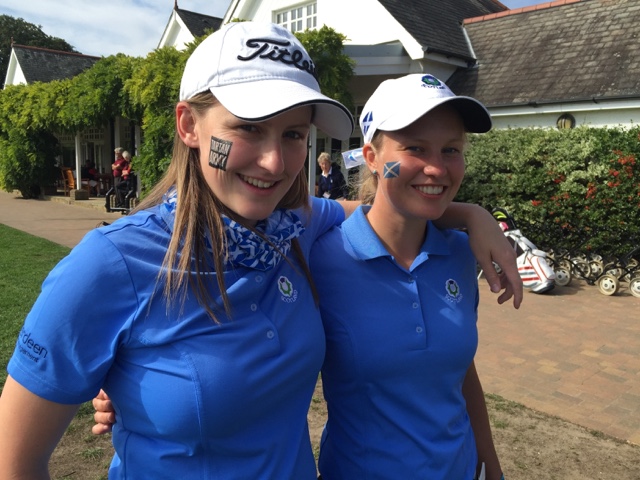 Scotland put in a fantastic performance in the Home Internationals at Royal Wimbledon GC this week.  They started slowly with a loss to Ireland 2.5 – 6.5 on the first day. Then on day two, having lost the foursomes 1-2 against England a truly inspired performance saw them take 5 of the 6 singles games to record an historic victory over the title holders.  This included wins for both Gabrielle Macdonald and Kate McIntosh in true Midlothian County style!

With Ireland having drawn with Wales the competition was wide open.  If we could beat Wales, and depending on the Ireland v England result, the title could go to Scotland.  Were we dreaming?  Well out ahead England came back fighting and defeated Ireland.  Just like county days we were totting up the count-back points! A win would secure us the title. But despite a fantastic effort by Kate in particular, who turned her game around to win on the 18th and a sterling effort by Gabrielle, we came up just short, loosing to Wales 4-5. So we went from the possibility of winning the championship to being fourth in the space of the last few holes – just one game (a couple of putts!) short.  What a cruel but wonderful and exciting game golf is!
All the team performed really well and the team spirit was excellent. It was the best performance by a Scotland team for many years.  And as my time as SLGA Performance Director comes to an end and we move forward in to a new era in Scottish Golf, it was particularly pleasing to have two Midlothian County players in the Scotland team doing their county and their country proud. Hopefully they will take that form and experience forward to the Country Finals in Stranraer where I will be performing my last SLGA duties and will of course be totally neutral!!
Mary Richardson
Ladies Home Internationals