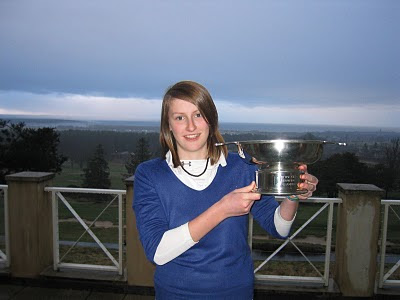 On a very wet and cold day at the Dukes course in St Andrews, Kate McIntosh (Broomieknowe) was crowned Scottish Junior Champion of Champions, winning the title on the better inward half from Midlothian team mate Rachael Watton (Mortonhall). Starting at the 10th hole after a one hour rain delay, Kate played her first 9 holes in level par and was still level when she reached the par 4 seventh (her 16th hole), where she ran up a triple bogey 7 and thought her chance of the title was gone. But Kate showed her resolve by paring the next hole and just narrowly missing a birdie putt on the last, to shoot a three over par 74. Rachael had one of those days when the putts didn’t drop and a missed putt on her last hole (9th) cost her dearly.

However both Kate and Rachael’s scores of 74 were fantastic on an extremely wet course, and in fact if preferred lies had not been in operation, would have been a course record. 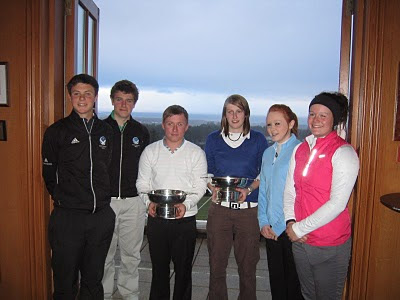 Gabrielle Macdonald didn’t have her best day, which wasn’t surprising given that she has just returned from Australia and is still suffering from jet lag. This cold Scottish weather was a bit of a shock to the system and the waterproofs hadn’t seen the light of day for a few months, so she just went looking for some Kangaroos in the trees! Welcome back Gabrielle! (nice tan!)

Well done girls – Midlothian is proud of you and we look forward to great things for the rest of the season.