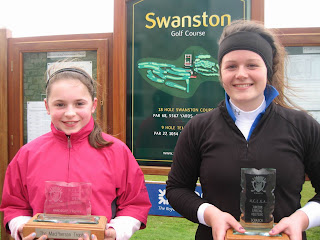 A great day was had at Swanston New Golf Club today as the MCLGA season got underway with the Junior Spring Meeting. 13 girls took part in the main competition on the 18 hole golf course while another 9 played 12 holes on the Templar Course, followed by a putting competition. The snow of last week had, luckily, disappeared over the weekend and the forecast rain managed to stay away until after the golfers had all returned safely to the clubhouse.
In the main competition, the course record, held by Noreen Fenton, was under threat. But after 12 holes it looked as though it would stand to see another day as moans of the swirling wind were heard to swirl around the 13th tee! But Rachael Watton, disappointed to miss her birdie on the 18th green, came home with a 78, one better than Noreen’s 79. Emma Morrison, who gained her first CONGU handicap at the end of last year had the round of the day with a level par net 69. A great round which, with the CSS increasing by 3, reduces her handicap by 1.5 shots. Well done Emma. 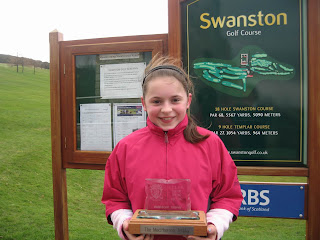 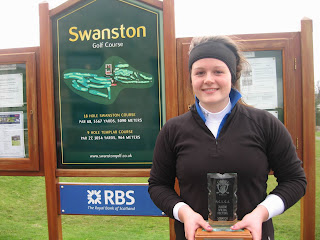 On the Templar Course, the burn seemed to come into play rather a lot, which caused all sorts of problems! But two great scores were recorded. The first by Kim Naysmith who scored a very impressive 9 over par and the second by Anna Massey with an 11 over par; both scores catching the eye of Rachael Watton and causing a slight dropping of her jaw! The non-handicappers then took to the putting green to test their skills. They were joined in this by Lucy Morrison who held her own with her playing partners and took the honour on a couple of occasions with a couple of 2s. However, the end result brought a tie and under the watchful eye of the Junior Cuthbertson Cup team, the play off was held. As the bets on the winner were being placed with bookie extraordinaire, Gillian Simpson, Alexandra Massey won the toss and the honour. A great putt was struck which finished no more than 6 inches from the hole. Following her, Kim Naysmith left her first putt short and just missed her 2, allowing Alexandra to tap in to win the putting.
It was a great day and our thanks go to all at Swanston who helped to make the day so successful. The pizzas the girls had afterwards went down a treat! Thanks to all the Mums, Dads, Brothers and Grans who helped to keep the scores, to Kay and Anna for all their help and time during the day and to Joan for all the organising.
The results were:
1st scratch: Rachael Watton, Mortonhall (78)
2nd scratch: Gabrielle Macdonald, Craigielaw (82)
1st handicap: Emma Morrison, Craigmillar Park (net 69)
2nd handicap: Kirsty Simpson, Murrayfield (net 78)
1st non-handicap: Kim Naysmith (51)
2nd non-handicap: Anna Massey (53)
1st putting: Alexandra Massey
2nd putting: Kim Naysmith
Junior Spring Meeting