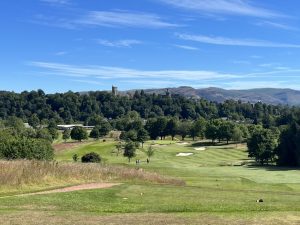 Temperatures were still high for Day 2 of the Inter County Matches although the sun stayed behind the clouds for most of the day, making it very muggy.

The Team took on a strong home side in Stirling and Clackmannanshire whilst Fife played against East Lothian.  We were first on the tee again today with a strong foursomes line up. Kate McIntosh and Rachael Livingstone took on County Captain, Alison Davidson and Laura Bissett, in what turned out to be a tight match which closed out to a 2&1 win for the opposition. Alison holed a bunker shot at the 2nd for an eagle and the pair followed with a birdie at 3, so Kate and Rachael had to fight hard to contain the early lead. Next pair out was Anne Hanson and Louise Fraser who were drawn against Louise Fox and Alison Goodwin, which turned out to be a strong partnership with the Stirling and Clacks girls winning 4&3.  The final foursomes match was between Karen Ferguson-Snedden and Fi Wait against Margo Gardner and Linda Allan, with the Midlothian pair securing a 3&2 win for us in the morning.

We know we had to come out strong in the afternoon to secure as many wins as possible and the Team delivered a great performance in securing a 3-3 half, which kept us in contention. This was greatly assisted by Fife and East Lothian halving their matches as well, which demonstrated there wasn’t really much between the four Teams.

Final Score: Midlothian 4.5 Stirling & Clackmannanshire 4.5 and all results can be viewed here.

So, it is all to play for tomorrow as each County has a chance to pick up the trophy!

Many thanks to today’s caddies for their support: Moira Stratham, Isobel Halliday, Liz Calder, Yvonne Wilson, Elaine Lumsden and Diane Neave.  Grateful thanks also to Muriel Gilligan who has been a fantastic support to me in the absence of a Vice Captain in organising the caddies.

Inter County Matches Day 2 Round Up