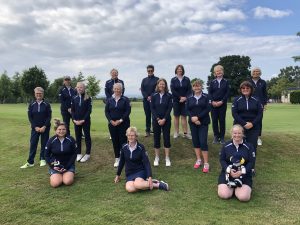 Wow, what a day for all the players. It was great to see the return of this Tournament for everybody involved. Match day 1 played and all to play for from all 4 Counties over the weekend.

Live scoring on the SGL APP was expected today, however there was a software issue at the SGL end. Today a lot of work behind the scenes between Midlothian officials and SGL would appear to have it up and running and tested ready for Day 2. Players will be asked to enter their result of a win, loss or half after each hole. Please check out live scoring on Saturday. Fingers crossed.

Friday, Midlothian Team were ready for the return of the qualifying event and 8 players from a squad of 10 would represent Midlothian on Day 1 in 8 singles matches. East Lothian were fielding a strong team this year and it was always going to be a tough opening match to get us going. The Midlothian players dug deep from start to finish and we pulled together as a team and finished the day with a resulting half, 4 games each.

There was some tough opposition in some of the games but the players were on for a fight. Some of our wins appeared quite strong but mostly the games that we lost would be a good losing result. We had a real mixed bag with some strong wins whilst one game would be 5 down during play but ended up going down the 18th hole. Midlothian Team are comfortable with their opening halved match and look forward to the games at the weekend.

In Match 1, Stirling & Clackmannan played Fife and they ended with a halved match too. All 4 Counties finished Day 1 with 1 Match Point and 4 game points each.

Day 2, Saturday 3rd July, will start at 1106, Stirling & Clackmannan V Midlothian then at 1210 East Lothian V Fife. Spectators are welcome but all Covid guidelines in place must be observed and respected with social distancing at all times please. Thank you.

Hopefully see you there….