Amazingly although cooler today and overcast we managed to stay dry until around the 12th and then it became a not nice afternoon especially as we lost today by 3.5 to 5.5.

We won 2 out of the three foursomes matches in the morning but the singles though very hard fought were lost 1.5 to 4. 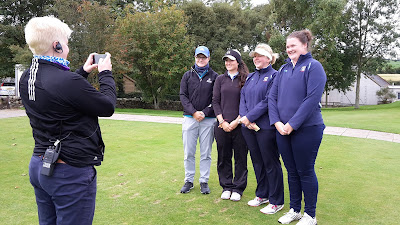 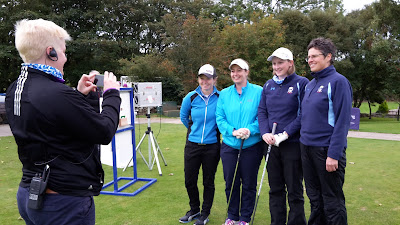 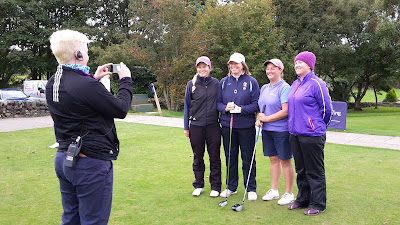 Our foursomes teams. Great two wins out of three.

What an exciting afternoon of singles. They were a strong team to beat but the girls certainly gave it there best shot. We lost the first two matches and won the third so only had to win two out of three to regain the trophy.

Wendy was 5 down at the 5th.. 2 lost balls and 3 birdies . But then came the great Wendy fight back to end up one down by the 15th. she was still only one down going down the 16th but great putting by Claire won the match for Angus. So two matches left and we needed them both.

Karen Marshall had a birdie two at the 15th to go 1 up in her match against Jemma Chalmers. Unfortunately a slightly miss aimed drive at the 16th put it back to A/S. An amazing putt by Angus on the 17th sadly put us one down and that was the end of our chances to win. But Karen’s magic hands and a fantastic shot out of the bunker onto the green, to be shot of the day,  meant a halved match.

Hannah our backstop again, was 1 down going up the 18th and managed to half the last hole to end up just one down after a very exciting match.

Kate earns the title of ‘woman of the match’ as she won 5 out of her 6 matches. She is very attached to her new driver. Not surprising as she  was hitting it over 250yds!

So a great final day played in the best of spirits. Thank you team for your wonderful efforts.

Many congratulations to Angus for their win today.