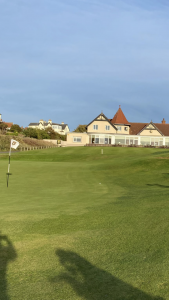 The final County Competition of the year is the East Division Championship hosted by Fife at Lundin Links. A perfect day for it and perhaps a little breezy with the wind picking up making it slightly more trickier for the final groups. A field of 86 played with 26 players representing Midlothian. Some varied scores returned within the field but as the last few groups returned many of the players scoring got lower and lower.

Congratulations to Gillian Paton, Ladybank, who won the East of Scotland Championship with a scratch 73. Runner up was Anne Hanson, Turnhouse with a scratch 74 and 3rd was Jenni Allan, Glenbervie scratch 77 BIH.

The handicap prizes was a clean sweep by Midlothian players –