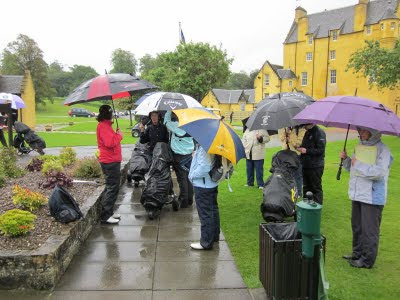 Well ……….. we woke up this morning and went for breakfast. It started to rain. We set off to the club and it rained some more. The greens were already starting to flood so a Captains meeting was convened. SLGA handbooks were consulted and it was agreed that we would put the singles out in the morning as the weather was set to get even worse – we weren’t wrong! So a reshuffle was quickly done, phone calls were made and players gathered.The caddies waited ‘eagerly’ ….. surely they don’t expect us to go out in this? 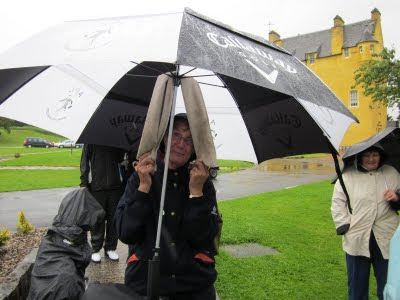 But off we went. The team of greens staff and volunteers worked very hard and kept the course playable (just), but it didn’t seem like mid summer’s day, more winter day.

Anyway, our team were fantastic and so were our caddies. They knuckled down, dealt superbly with the atrocious conditions and came out 5-1 victors over East Lothian. It was a very gutsy performance (especially by the caddies!).

To cut a long story short, despite the efforts of the greens staff we were unable to play the foursomes matches and so the result stood at 5-1.

In the other match, Fife beat Stirling & Clackmannan 6-0, to set up a title deciding match between Midlothian and Fife, who are currently level on both match and game points. The forecast doesn’t look much better for tomorrow so it should be an interesting day.