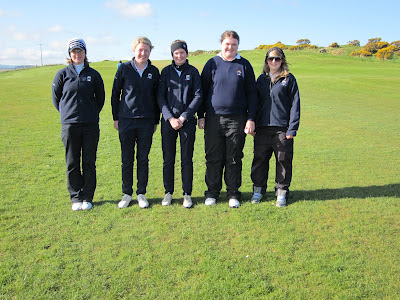 Congratulations to our junior team on reaching the Cuthbertson Cup final today. The girls played some great golf and fought really hard right to the end. But they were up against a really strong East Lothian side who deserved to retain the Cuthbertson Cup today.

In the morning we played Stirling and Clackmannshire. Hannah Scott led from the front with a 7&5 win over Catherine Goodwin. The rest of the team were struggling a little, but a gritty comeback from Jessica Dalgetty secured a second point. Kirsty Burgess and Emily Dalgetty fought hard to reach the 17th and 16th respectively to build on Hannah’s impressive win, thus ensuring a clear points victory.

The final was always going to be a big challenge. Hannah played extremely well to take Lesley Atkins to the 17th, but Lesley was playing some superb golf. Emily had a real ding dong battle with Clara Young, loosing eventually on the 17th. Jessica and Kirsty both showed some real fighting spirit but again East Lothian were just too strong.

The games were played in fantastic spirit and the girls all gained valuable experience. We will be back to fight hard again next year – older and wiser!

Thanks to everyone who supported the team