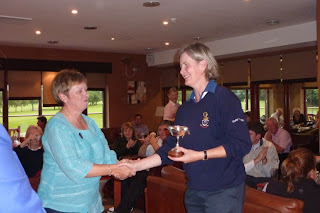 We awoke this morning to find Glasgow had been awash over night. There were puddles everywhere, as well as a constant drizzle. At breakfast it was revealed that the team and caddies had been subjected to a kniting lesson by our new knitting bee, Sal Shepherd, the night before. But of course, it all ended in tears! Anne Brownie, first, knitted a pearl row instead of plain and then Karen Marshall cast off her wonderful creation. But Margaret Ritchie was quick to the rescue, casting on again and wiping away the tears! Sal’s application to join the New Town “Stitch and Bitch” sessions has been submitted and she hopes to receive her membership and start attending within the next week! 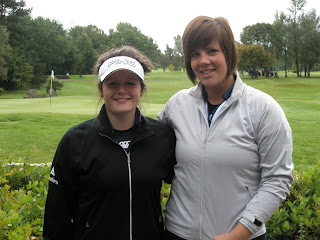 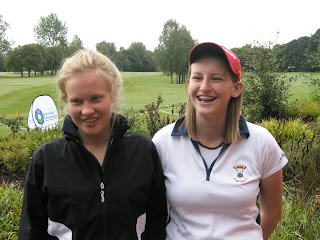 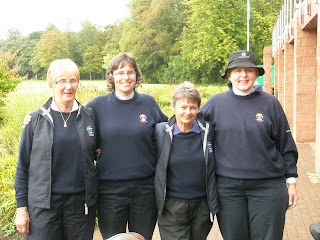 Having partaken of breakfast, everyone emptied out of the hotel and made their way, under very grey skies, to the golf club. Our morning foursomes line up saw a slight change. Rachael Watton was back and joined up with Jane Turner to head the field. At number 2 we had Gabrielle Macdonald. But today she was partnered by her chum, Kate McIntosh. At number 3 (we couldn’t leave them out!), we had the young, golden, oldie girl stalwarts, themselves, Karen Marshall and Wendy Nicholson. Following on from yesterday’s results we knew that Renfrewshire had the same number of match points as ourselves but 2 game points more. We would need to play extremely well and win 9-0, which we knew would be tough but all were more than happy to go for it. All of the matches went all of the way to the 18th. Jane and Rachael wining by 1 hole, Gabrielle and Kate halving theirs and Karen and Wendy, unfortunately 3 putting, to lose by 1 hole.
For some reason we barely had time for lunch before the afternoon singles were being called to the first tee. We had to win all of the afternoon singles. In our heart of hearts, we knew it was a lot to ask and so were out to do our best so as we could hold out heads up at the end of the weekend. We changed our order, putting Rachael out first and Jane out last. Unfortunately, so did Angus! We then had Gabrielle, moved Karen up to number 3, Kate and Louise Fraser. All were under strict instructions to win. It didn’t matter by how many, they just had to win. By the 7th hole, we had more or less resigned ourselves to the fact that we were not going to do it. We were 3 down in the first, third and sixth matches. Gabrielle and Kate were all square, while Louise was 4 up – it wasn’t going to be enough. Suddenly, news filtered through that Renfrewshire were only up in one of their games. That brought us hope and gave us renewed vigour to spur on the team. Suddenly, the fightback began. Rachael got her match back to all square, Karen was back to 1 down, Jane was back to all square, Gabrielle and Kate were all square and Louise was 5 up. Then results of the other match started to come through – a half in the first game (hope was building), a win in the second game to Renfrewshire (we could cope with that but it was going to be tight), a loss in the third (we wanted to hear more of that kind of news), but then a win in the fourth, loss in the fifth and win in the sixth made us get our thinking caps on. Renfrewshire had won by 5.5-3.5 which meant we needed all 6 of our games. Suddenly, Rachael was 1 up on the 18th. She boomed an almighty drive straight down the fairway and hit a peach of a 5 iron on to the back of the green – a 432 yard hole! Two putts and the game was hers. Next followed Gabrielle, also 1 up on the 18th. A great drive and a sensible lay up was followed by a lovely approach to the green and 2 putts for a regulation par, a halved hole and her game. Meanwhile, news came from the course that Louise had won her game by a marvellous 7&5 margin and Kate was dormie 2 up, eventually winning by 2&1. Things were beginning to happen and excitement was building! Were we going to do it? Were we going to upset the odds with a fantastic last afternoon performance? Unfortunately, Karen arrived on the 18th tee 1 down, and the dreams were over. But having said that, she hit a fabulous drive before nearing the spectators to ask the state of the match. It certainly was far from easy to tell her that it was over. There was nothing we could do to force a further countback. But, to give Karen credit, she played the 18th under extreme disappointment, stuffing a wedge to a couple of feet and sinking the putt for a birdie and a halved game. As the cheers from Renfrewshire began to resound around the course, Jane finished her match, after a tremendous comeback, at the 16th, winning by a 3&2 margin.
The team was fantastic. The team spirit was fabulous and it was a great honour and privilege to be with them. Friday afternoon was such a shame and I am sure they are all kicking themselves, thinking of a missed putt or a wayward shot that could have made the difference. But at the end of the day, Midlothian should be proud of their team. They all conducted themselves in a totally fantastic manner and supported each other to the hilt. They were all up front in the way they were feeling each day, whether they wanted to play or rest and all took the team selection decisions in their stride. Our congratulations go to Renfrewshire on their win but my congratulations go to our team. You were fantastic and I was so proud to be with you and be part of it all.
Results:
Foursomes:
Jane Turner & Rachael Watton beat Ailsa Summers & Rebecca Wilson by 1 hole
Gabrielle Macdonald & Kate McIntosh halved with Claire Penman & Ashley Smith
Karen Marshall & Wendy Nicholson lost to Ann Ramsay & Jessical Meek by 1 hole
Singles:
Rachael Watton beat Rebecca Wilson by 1 hole
Gabrielle Macdonald beat Claire Penman by 1 hole
Karen Marshall halved with Jessica Meek
Kate McIntosh beat Ashley Smith by 2&1
Louise Fraser beat Fiona Gilbert by 7&5
Jane Turner beat Ann Ramsay by 3&2
Renfrewshire beat Dumfriesshire by 5.5-3.5
County Finals 2010 – day 3