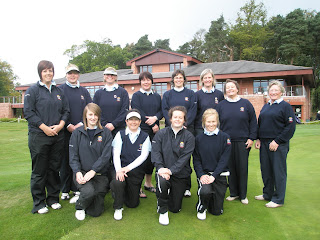 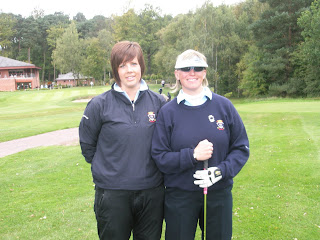 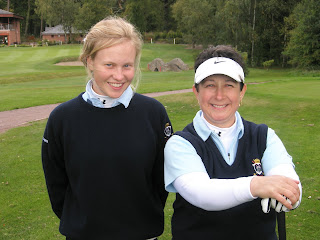 Having been told off for calling the”old yins” golden oldies and elderly stalwarts, the individuals concerned would like to be called the “young ones” or “golden girls” but with hats like that….. However, since they were both around in the 1970s, I’m not sure of the difference. There was also a dispute in the bar (as the girls were drinking lemonade, I might add!) as to which one would be Blanche! Also, I have been told that under no circumstances has the Commanding President to have anything to do with tonight’s write up. So under those circumstances, my report is going to be about the golf and nothing more – tomorrow night could be different if I stick to the guidelines tonight! I will also be at home and under no life threats! 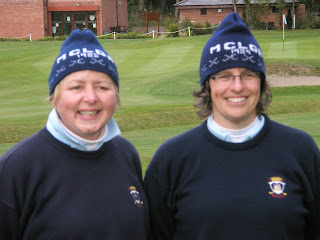 However, I would like to delay getting to the golf, in order to thank the President, on behalf of Mini Mac, for her strawberry ice-cream! As you can see from below, she really enjoyed it! Also, I would like to let it be known that one of the caddies is so envious of our President’s kind contribution in keeping the County Mascot so pleased that she too has taken up knitting and, with any luck, Mikhaila or Mini Mac should have a yellow scarf ably knitted by Sal Shepherd by next year! 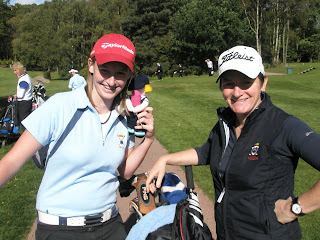 And to the golf……
All were told last night that 10 & 8 wins were what were required and all were up for it. This morning the team were more than up for the task ahead. We arrived at the Golf Course but unfortunately Rachael Watton felt she was not up for playing. Her place was more than ably taken up by Louise Fraser. Partnering Jane Turner, they didn’t quite meet their 10 & 8 objective but scored a very respectible 4&3 win in their first pairing together. Next up were Kirsten Blackwood and Gabrielle Macdonald who brought in a well fought half point. At least we had the “young ones” or “golden girls”, as ever at number 3, who turned out to be the only ones to pay attention at last night’s team meeting! They were the first to bring home their point by a wonderful 8 & 6 margin.
Next up were the singles – the bit we had bother with yesterday. Jane was out at number 1 and had a very frustrating half with Diane MacDonald. Next came Gabrielle followed by Kate. Both found themselves dormie 4 up before deciding to prolong the agony of gaining the point for the team by 2 & 1 and 4 & 2 respectively. The only loss of the afternoon came in the 4th game where Kirsten Blackwood was out of sorts and came a cropped by 3 & 1. Another dormie 4 came from one of the”young ones” or from Blanche (alias Wendy Nicholson) who finally prolonged the agony until the 17th, finally winning 2 & 1. Last up was Blanche no. 2 (alias Karen Marshall) who had a very tight tussle. 1 up at the turn, became 2 up after 12 and the next news was that she had reached the 16th and was all square. However 2 fantastic shots at the 16th, to set up a wonderful birdie, took her to 1 up with 2 to play. She then halved the 17th and approached the 18th dormie 1 up. Her opponent took 3 woods to reach the green and just short of the burn, Karen hit her approach shot through the back of the green and left herself an impossible pitch – over a hump onto a down hill, lightning fast green with the wind behind. She made a gallant effort but the ball kept on rolling. Her opponent putted dead and Karen hit a wondeful putt which finished a centimetre to the right of the hole to end her game all square.
So all in all, it was a great match. The team won by 6.5 – 2.5, which under any other circumstance, everyone would have be proud of. However, there were a few disappointed individuals. Renfrewshire also recorded a win today against Angus by 7 games to 2. Midlothian is still in the running but it is very much dependent on tomorrow’s results. The way things stand at the moment, Renfrewshire have 2 game points more than Midlothian. So, either we have to rely on Dumfriesshire beating Renfrewshire tomorrow and ourselves beating Angus or else Midlothian needs to beat Angus by 3 game points more than Renfrewshire beat Dumfriesshire. Whatever we need, all we can do is our best and the team is all up for a 9-0 win tomorrow. Watch this space to see if it happens!
Results:
Foursomes:
Louise Fraser & Jane Turner beat Diane MacDonald & Lindsey Kirkwood by 4&3
Kirsten Blackwood & Gabrielle Macdonald halved with Jordana Graham & Katie McCraken
Karen Marshall & Wendy Nicholson beat Rachel Walker & Margaret McGregor 8 & 6
Singles:
Jane Turner halved with Diane MacDonald
Gabrielle Macdonald beat Jordana Graham 2&1
Kate McIntosh beat Lindsey Kirkwood 4&2
Kirsten Blackwood lost to Rachel Walker 3&1
Wendy Nicholson beat Katie McCracken 3&1
Karen Marshall halved with Trish Lilly
Renfrewshire 7 Angus 2
County Finals 2010 – day 2