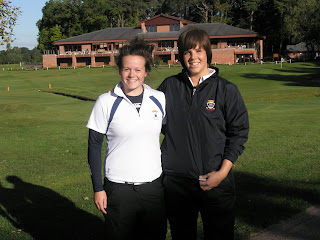 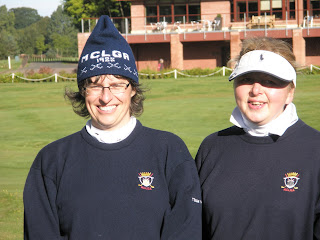 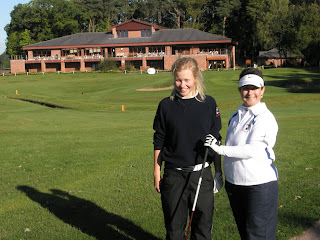 So here we are in sunny Bothwell after day 1 of the 2010 County Finals. Luckily, everyone staying in the hotel has been counted, although that small bit of housekeeping took a long time! For those of the more adept map readers, the journey from Edinburgh took 30 min. However, for some others, it took anything from 1 to 2 hours! Stories of having to go through East Kilbride, having to get locals to lead them to the golf club and having to go through Strathclyde Country Park, not once but twice, have all been recounted! However, although the Commanding President managed to find her way to the hotel complex with no trouble at all, she did try to check into the wrong hotel, insisiting that we were all staying there and reeling off everyone’s name in the hope that a booking could be found! She was also bitterly disappointed – had she “had nothing on” on Thursday she would have gone to see the Pope!
Anyway, as the husband of my neighbour keeps telling me, enough drivel and on with the golf!
Today was day 1 of the County Finals. Having had a good practice yesterday, the pairings for today’s foursomes against Renfrewshire were decided upon and all were up for it. Jane Tuner and Rachael Watton would lead the way, followed by Kirsten Blackwood and Gabrielle Macdonald, with the golden oldies, Karen Marshall and Wendy (nice hat! Anyone recognise it?)Nicholson, bringing up the rear. What a grouping the girls made as they returned 3 points out of 3 at lunchtime. All were euphoric, or would have been had there been more time over lunch. Instead, an exceedingly quick bowl of soup and sandwich was had before the first singles match was on the first tee – ahead of the SLGA officials, I may add! First out was Jane against Megan Briggs. Jane held on until the 8th, before suddenly losing 4 holes in a row. Then came the fightback and the next 4 holes were Midlothian’s! However, a missed putt on 17 and a rather fortunate chip in by the opponent at the 18th, gave the game to Renfrewshire by 2 holes. Rachael, playing at number 2, did not have a happy afternoon and lost to Eilidh Briggs. Kate McIntosh played superbly at number 3 but wasn’t given a look in by Donna Jackson and went down by 3&1 and the Midlothian groupies were getting extremely nervous. Next up was Louise Fraser who was under pressure from early on. The midget gems, supplied by the caddy, were not even being considered as she constantly fought a losing battle. So that left the elderly stalwarts at the back to do the business. All that was needed at lunchtime was 2 game points and all we had left on the course were 2 games – but both were up. As Wendy played the 17th 1 up, Karen was on the 16th, 3 up. Wendy’s opponent made a good up and down at 17 and so they headed to the 18th with Midlothian still 1 up. Karen then halved the 16th, wining her match by 3&2. We still had the match win in our grasps. Three good shots from Wendy found the green. Her opponent was just short in 3, having just missed going into one of the bunkers. Wendy had to putt first – a tricky, fast downhiller. The ball was struck beautifully but just kept rolling and rolling. Her opponent had a good chip on, Wendy missed her return and her opponent holed out to half not only the game but the overall match.
A half match from a 3-0 lead at lunchtime has hurt hard. The team are devastated but a good team meeting and a couple of drinks and the fighting talk has returned. The girls have bounced back, know exactly what they have to do and are ready, waiting and hungry for tomorrow!
Results:
Foursomes:
Eilidh Briggs & Megan Briggs lost to Jane Turner & Rachael Watton by 1 hole
Donna Jackson & Alyson McKechin lost to Kirsten Blackwood & Gabrielle Macdonald by 3&1
Gillian Kyle & Carol Whyte lost to Karen Marshall & Wendy Nicholson by 1 hole
Singles:
Megan Briggs beat Jane Turner by 2 holes
Eilidh Briggs beat Rachael Watton by 6&5
Donna Jackson beat Kate McIntosh by 3&1
Alyson McKechin beat Louise Fraser by 4&2
Liz Stewart halved with Wendy Nicholson
Carol Whyte lost to Karen Marshall 3&2
Dumfriesshire 2.5 game points Angus 6.5 game points
County Finals 2010 – day 1