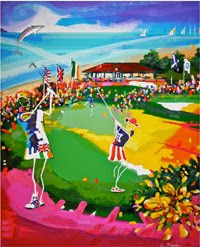 The countdown to the Curtis Cup in Nairn from 8th to 10th June this year reached its “19 weeks to go” mark with the announcement of the GB&I Squad on today. Two Scots, Pamela Pretswell and Kelsey MacDonald, have been named in this preliminary Squad, which contains many exciting young players whose fine shotmaking skills will be well worth watching over the Nairn Links.

An enthusiastic and vociferous home support would help boost our team’s chances of success vs the USA. It is hoped that many Midlothian members will head north to watch some Curtis Cup action. If you are thinking of going and would like to be kept in touch with other County travelling support or possible group transport plans, please note your interest as follows: