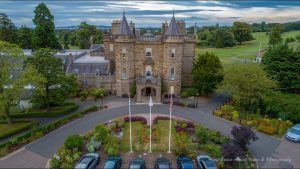 Alison McBride the top qualifier held her nerve on her new home course and secured a position in the semi final. She will play MCLGA Captain Louise Fraser 😊 who came back from 2 down to beat experienced player Jennifer Bryans. Karen Ferguson-Snedden had 2 fairly comfortable wins to progress into the semi final against Rachael Livingstone who had a close match up the 18th hole with Camille Amat. In the B section Fiona Findlay squeezes out club friend Viv Mitchell to play against Jacky Burnett who had an up and down tussle with Susan Gardiner. Jane MacDonald had a comfortable win and had to wait on the result from the close match between Una Fleming and Celia Macintyre.

Thanks to Norma Richmond for starting everybody on time and to Gail Joughin and Angela Hughes for collecting scores and updating as necessary. Angela kindly took some photos of the players today and the Championship Gallery will be available to view via a link on Sunday evenings report.

Play starts Sunday morning from 8.06am and both Finals will be played in the afternoon from 1.30pm. It looks like another scorcher of a day so why not pop along and watch some golf. Bring your shades and sunscreen. 🌞😎🏌️‍♀️ Full results can be seen on the Competition Draw page.