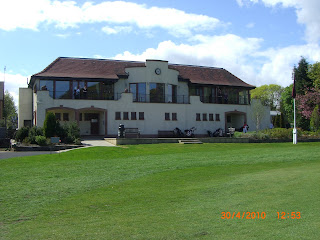 The match play stages of the main and B-section County Championship were held today at Prestonfield Golf Club. In wonderful weather and with the blossom showing signs of possibly being in full bloom by Sunday, the players were all in jovial mood as play got under way this morning. After the first photocall of the day, Wendy Nicholson (Broomieknowe), no. 1 seed, teed off to start the proceedings. It didn’t take long before the first complaint was made. Kirsten Blackwood (Craigmillar Park), playing against Claire Hargan (Mortonhall), was not overly enthused by the backdrop for the photo-shoot and, as can be seen below, decided height was the answer! Next up was jealously when Noreen Fenton (Dunbar), up against Hannah Scott (Broomieknowe), insisted that if height was the order of the day for Kirsten, it was the same for her. Getting the main Championship onto the course was not the easiest. When checking the number of clubs being carried, one player insisted that she only had the permitted 14 and counted to find 13. Another count gave her 13 and as panic started to set in, she realised her driver was missing. But, as she searched her bag, driver head cover in hand, the missing club was spotted having been abandoned on a sign post half way to the clubhouse! Eventually, the main Championship was underway and it was time for the B-section players. Needless to say, this was fairly uneventful until the second last tie. Sadly Coleen Derighetti (Lochend) had found her car had been broken into overnight and her golf clubs stolen. Having managed to borrow some irons from one person, some woods from another and a sandwedge from the V-C, she made it on to the first tee. Glad to get everyone started the Captain and V-C retired for a well earned bacon roll! 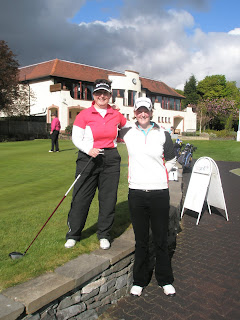 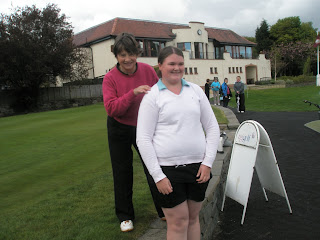 Some great golf was recorded in the first rounds. Linda Caine (Dunbar) and Sal Shepherd (Craigmillar Park) were 6 under par between them for the first 8 holes and their better ball for all 18 holes was 8 under par. Not to be out done, Claire Hargan and Kirsten Blackwood had a better ball score of 9 under par for the first round, which included 1 bogey. The games were all very close with 3 in the main championship needing extra holes, 2 of them going to the 20th. Three of the four junior qualifiers made it through to the second round, only Gillian Simpson (Murrayfield) falling to fellow junior member Kate McIntosh after a terrific match, at the 20th hole. Gabrielle Macdonald (Craigielaw) beat Claire MacDonald (Gullane Ladies) by 2&1 while Hannah got the better of Noreen on the 18th. In the B-section, two walk overs were given and 3 of the remaining 6 matches went to the 17th or 18th holes, with Coleen Derighetti taking her borrowed equipment to the 18th before losing by 1 hole to Isobel Halliday (Merchants)
The afternoon was not without its complaints as the President took over as chief photographer so as a straight photograph of the clubhouse could be posted on the website. Needless to say after 2 attempts, it was the clubhouse’s fault for being built squint! As the above picture shows, after a few attempts, the camera was turned to just the right angle to capture a straight shot and the players could at last get started! All was then well until the B-section players started to plead with the President not to be announced on the tee. Were their pleadings listened to? …….. No!
In the main Championship, again, great golf was on display. All of the Juniors came up against experienced opponents who were not going to let their concentration lapse. Kate McIntosh met fellow Broomieknowe member, Wendy Nicholson and a great tussle ensued with Wendy coming out on top on the 17th. Gabrielle had a great game against Karen Marshall (Baberton) and a fantastic sandy par save at the 18th saw Karen going through to Sunday morning. Hannah got off to the dream start and was 4 up after 5 holes. But Louise slowly but surely reeled her in, levelling the score on the 16th after a fabulous tee shot to within gimmie distance. A half at the 17th and a birdie at the 18th led to victory for Louise. In the fourth tie, Linda Caine took on Kirsten Blackwood and always appeared to have the edge. Putt after putt seemed to just slip past the hole by the narrowest of margins as Kirsten succumbed on the 17th. This gave Linda her first appearance in the semi-finals for near on 20 years. In the B-section Championship, Denise Mitchell (Murrayfield) recorded her second 3&2 win of the day and meets Jaci Moriarty (Lochend), who squeezed through on the final green. Ann Brown (Deer Park) recorded a resounding victory and was made to sit and wait to see who her semi-final opponent would be. That was between Isobel Halliday (Merchants) and Margaret Alexander (Baberton) who finished the 18 holes all square and, as the bar was calling, so were extra holes. Having got caught in a bunker, Margaret just missed her putt, giving Isobel the chance to clinch the tie by holing a 6 or 7 ft putt.
The day’s results can be viewed by clicking on “C’ship M-Play” and “B C’ship M-Play” on the left hand side of this page. What are you all doing on Sunday? Why not plan to call into Prestonfield to see some great golf? The first of the semi-finals tees off at 9.30 am with the finals starting at 1.45 pm. Come along and be part of the 2010 Championships.
County Championship – first rounds