Wow, what a day, what a weekend! 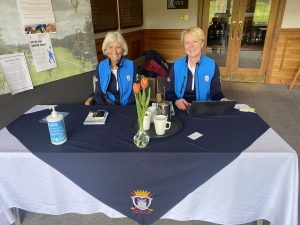 President Sheila Stuart and I were ready to welcome the Championship semi-finalists in the morning on a stunning Spring Sunday prior to heading up to the first tee for 11am, where Michaela and Mini Mac were ready to wish the players good luck 🍀 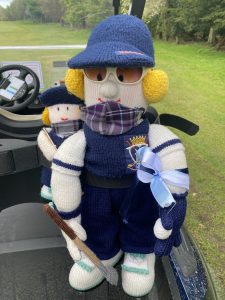 The three County B Championship winners returned to be joined by our very own Treasurer, Mary Stark (Mortonhall), who had bye into the semi finals. Our first match was between the two home players, Patricia Parkhouse and Mary Stark both providing a good display of golf and a keenly fought match which went all the way to the 18th where Mary won 1up. Muriel Gilligan (Swanston) sported her lucky sunglasses again but didn’t manage to continue her par golf streak from the previous day and lost out to Jane Macdonald (Merchants) 6&5. 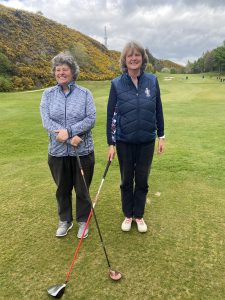 Both Jane Macdonald and Mary Stark put on a good show of golf and an exciting match in their battle for the B Championship silverware. Mary took the first hole but the match was all square by the 3rd. Jane delivered a great approach shot on the 5th to within 6 feet and won the hole to take the lead followed by another win at 6. The match was nip and tuck from there until Mary pulled it back to 1 with a lovely birdie on 10 and by the 13th the match was all square. Mary’s dogged determination and local knowledge prevented Jane from taking the lead again and she closed out the match on the 17th winning 2&1. Well done to both players getting to the final, a great achievement and Congratulations Mary Stark, Midlothian B Champion. 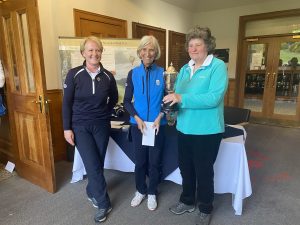 Our 4 semi finalists for The Championship were relieved to see the sun shining after playing in the rain yesterday afternoon. 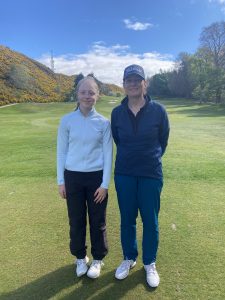 Home player Karen Ferguson-Snedden (Mortonhall) and reigning Champion, Freya Constable (Prestonfield) had a very tight and exciting match. Karen pushed hard all the way round but Freya kept putting the pressure on preventing Karen from getting too far ahead but Karen’s home advantage saw her clinch the tie on the 17th 2&1 and her place in the Final. 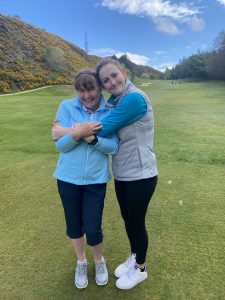 Anne Hanson (Turnhouse) and Kate McIntosh (Broomieknowe) had a friendly cuddle on the first tee but the distance between them soon grew with Kate creating a commanding lead of 4 through the first 5 holes. Kate’s outstanding golf kept on delivering with Anne struggling to get into her groove and find her usual A game, and she won the match 8&7 and a worthy place in the Final.

The Spectators were in for some high class golf in The Championship Final as the 2021 Scottish Senior’s Champion and home player Karen, took on the talented and two times Champion, Kate. 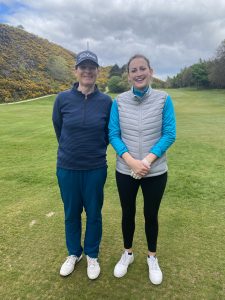 Both players were worthy finalists and we were in for a treat. Kate got off to a flying start winning the first two holes and a birdie at the 4th to go 3up. Karen proceeded to claw it back by winning 6, 7 and a birdie on 8 to pull the match back to all square. Both were in the left hand bunker at 12 with Kate’s shot flying over the back of the green and into heavy rough, where Kate received a sting in her tail 😉. Karen comes out well and wins the hole. Kate 2 up after 14 following a great birdie. 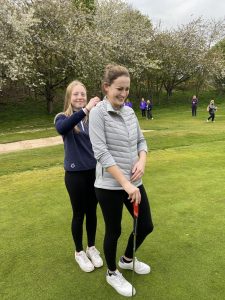 Karen sends her tee shot at 15 way right into deep rough, manages a good shot out and then a fantastic shot onto the green. Kate played the hole more conventionally hitting the green in regulation and the pair walked off with a half. The 16th came down to the putting and Kate sank the winning put to become our 2022 County Champion, and was presented with the Champion necklace on the 16th green by previous Champion Freya Constable. Well done to both players getting to The Championship Final, a fabulous achievement and congratulations to Kate McIntosh, The Midlothian 2022 Champion. 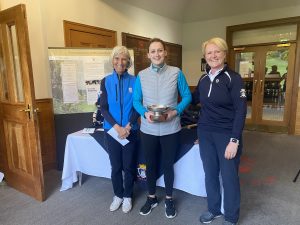 The event cannot run without the assistance of volunteers and it was all kept in house to officials. Thanks to President Sheila Stuart for starter duties, the role of rules official for the whole weekend and refereeing the Championship Final, Junior Secretary, Caroline Steedman for refereeing the B Championship at short notice and Treasurer Mary Stark for ensuring everyone received their vouchers! 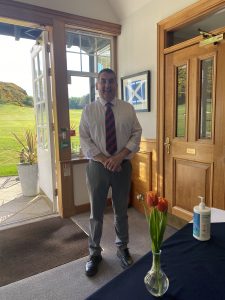 Thanks are very much extended to Mortonhall Golf Club for the courtesy of the Golf Course for the match play stages of the Midlothian County Championship. The Team at Mortonhall have been exceptional and contributed to a successful Championship weekend – special mention to Golf Operations Manager, Alan Mackay, Club Food & Beveridge Manager, David Henderson, and Wendy at the Halfway House for their fantastic customer service. And finally to the Greenkeeping team for the set up and high standard of the course and speedy greens at this time of year. 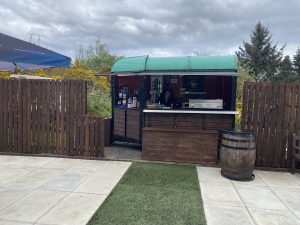 Next Midlothian event is the Commonwealth Spoons at Craigmillar Park on Monday 6th June. We look forward to receiving your entry and seeing you there!

Some further photographs from today – 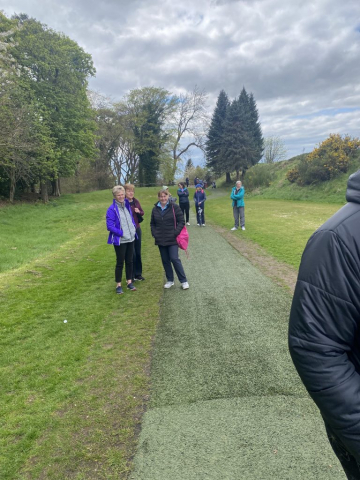 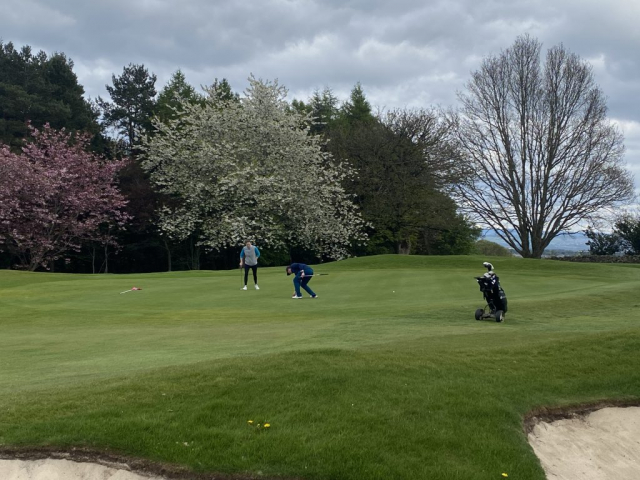 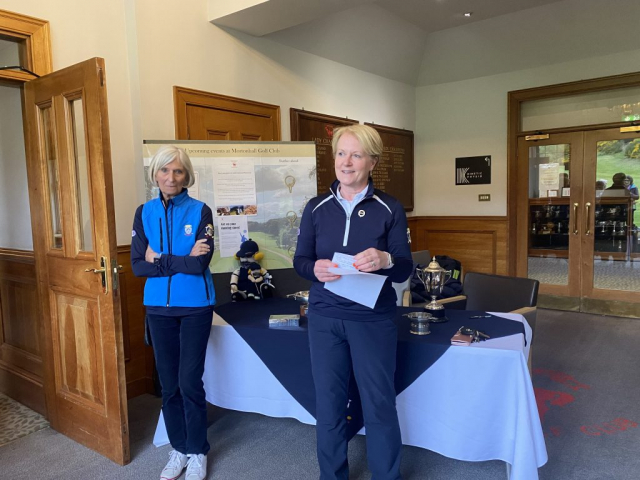 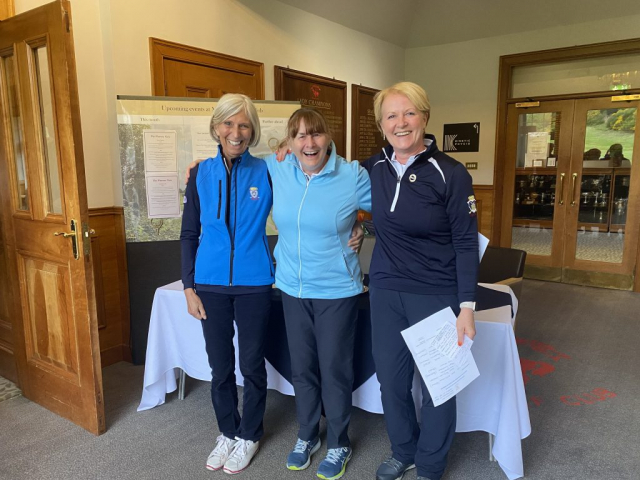 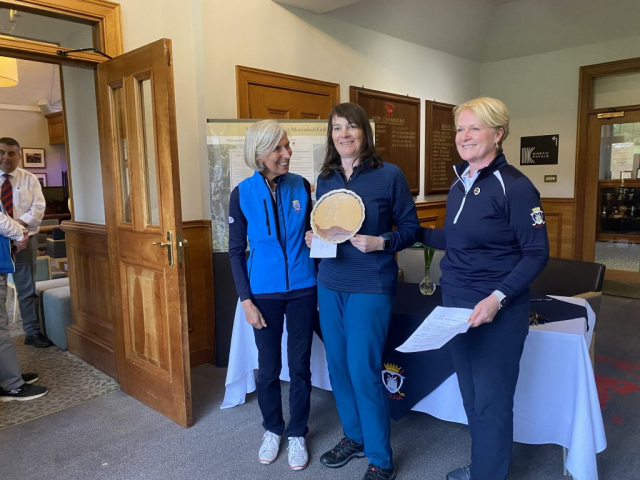 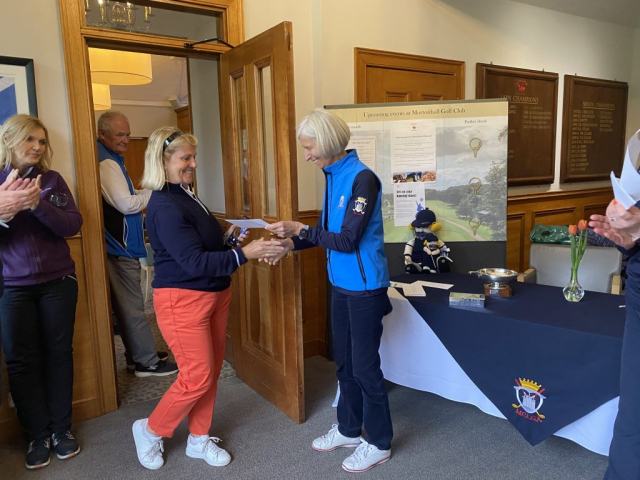 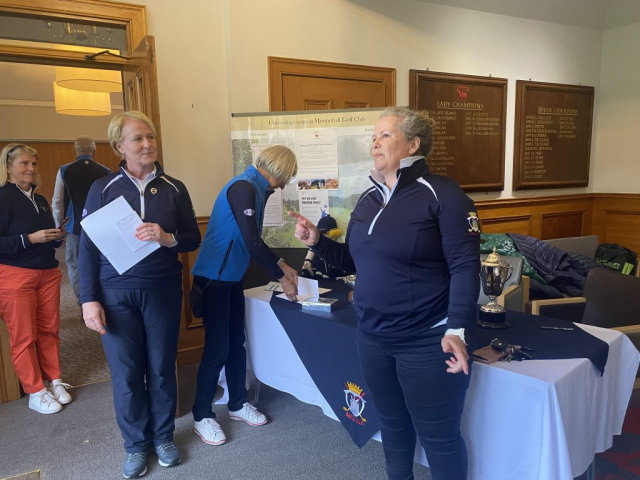 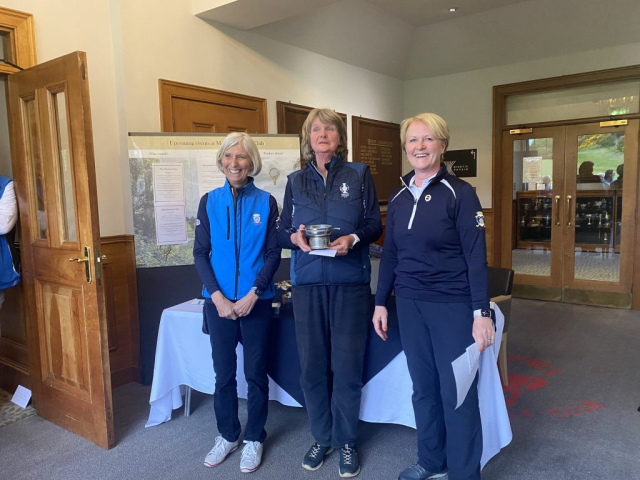 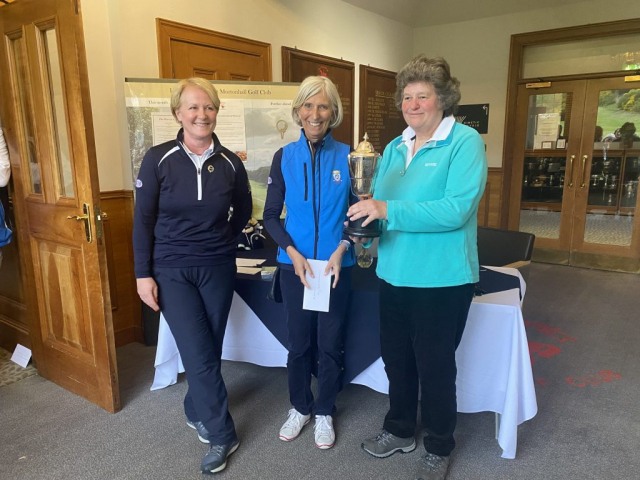 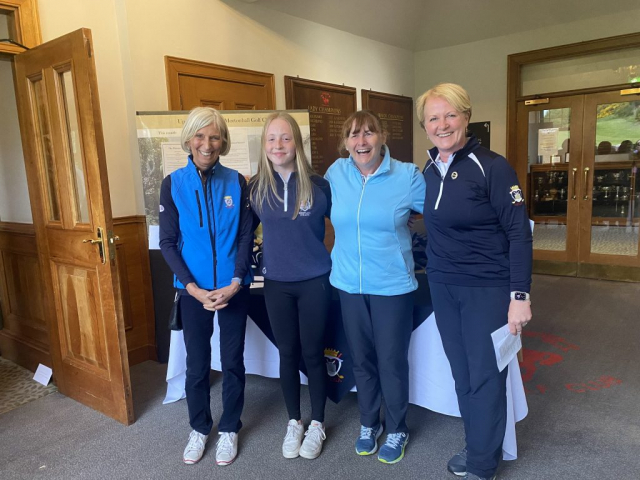 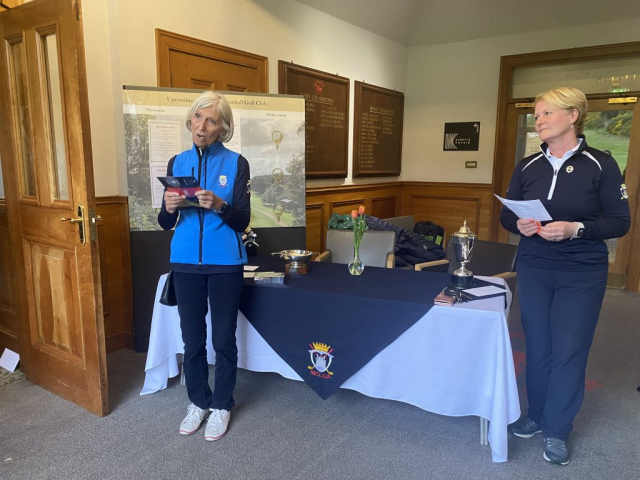 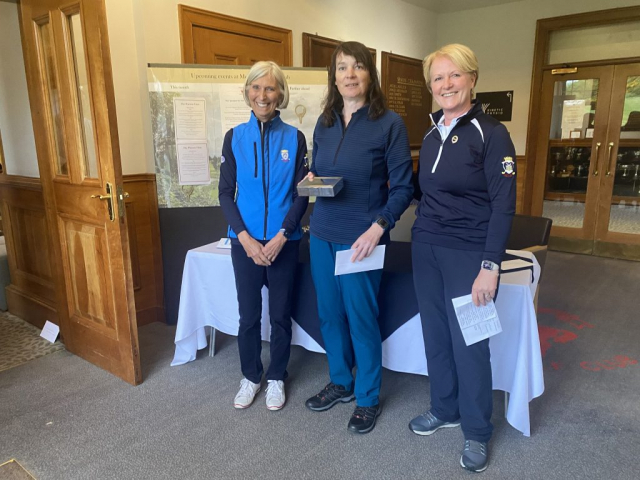 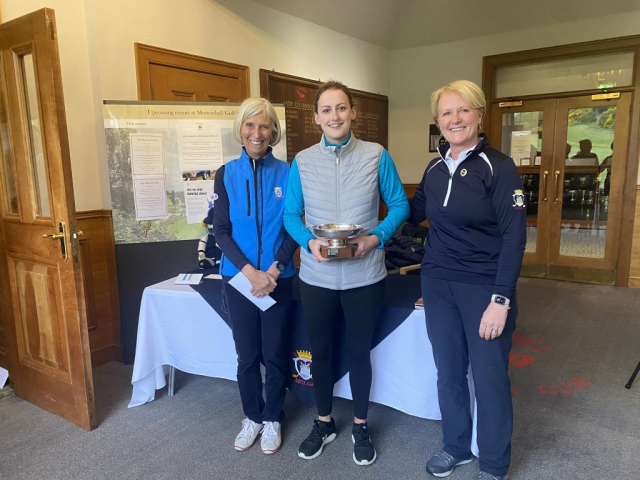 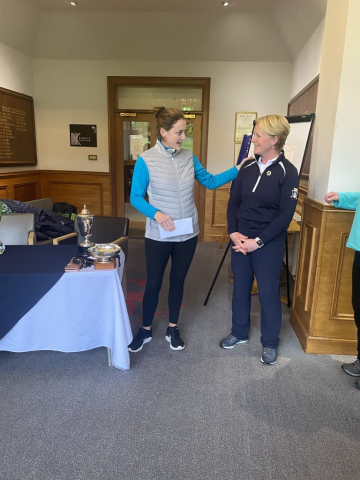 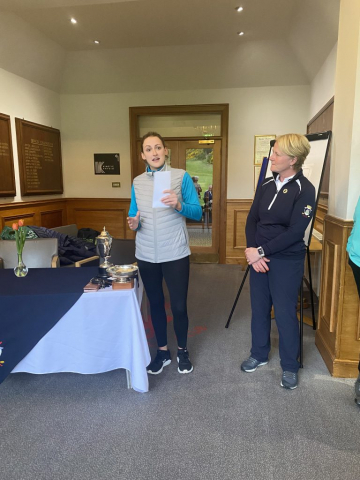 County Championship 2022 Round Up Day 2