To all members – send an email to Jacky Burnett [Jackyburnett13@gmail.com] to post your championship results – semis and finals.  Please send details about your Bronze championship too

Craigmillar Park
Karen Ballantyne won the championship on the 18th  beating Emma Morrison  to go 1 up.  It was a brilliant match, taking her total to 6.  Adding to a total that started in 1989!

Louise Fraser and Rachael Livingstone had an epic battle in strong winds.  Louise was two up by 4th but it was all square again by the 6th.  From then, each time one went up the other pulled her back to all square.  Rachael managed to get the edge at the 20th and became the Ladies Champion.  A great game.

The 3 Steedman Girlies have done the treble! 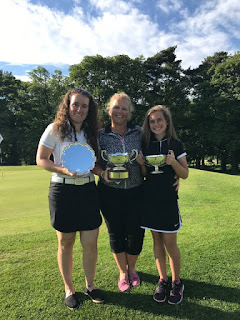 Caroline played Val Aitchison & won on the 17th hole with a birdie to win the Ladies Champs for the 3rd time.

Rachel played against Pam Townsend & won 4&2 with a par, defending her title for the Ladies B Champsionship.
Abby also retained her title playing against Sophia Gonzalez & was 1 up on the the 18th with a par.
Vicky Gumley won the Bronze Champs against Liz Mendl Cooper winning 2&1.

Merchants had four Midlothian members in the Semi finals of the Championship on Friday 16th.

Dalmahoy
The Club Championship was won by Kim Horne, beating Amy Foster 4&3 despite Amy only being 3 over par at the turn.   The Handicap knockout championship was contested by Linda Stewart and Joan Maclean with the match going to the 20th (result to follow!)

Prestonfield
Congratulations, to Naomi O’Brien (aged 14) who won the Bronze Championship at Prestonfield Golf Club on the 10th June 2017.   She played in 3 qualifying rounds and was seeded in the top 8.
In the final round she started with an impressive Birdie on the first by chipping in from under a tree.    It was a hard fought match which went to the 18th hole.    However, she managed to hold her nerve throughout the match.    A true Champion in the making.

Commiserations to Liz Taylor who lost the final of the Silver Division to Rachel Smith at the 16th.

Kingsknowe
Kingsknowe ladies have been competing in their Championship this week with the semi finals being played tonight – Thursday 15th June.

Championship Finals day is Sat 24th June with the Ladies Championship final being contested between Louise Fraser and Rachael Livingstone and the Bronze Championship between Denise Christie and Maureen Mackay.
Good luck to all.
Turnhouse
Congratulations to Susan Rennie who is the 2017 Turnhouse champion.
Susan Rennie held out to become Ladies’ Champion at the second extra hole in a closely contested match against Morag Wardrop. Both players also battled against the weather, especially during the final holes.
Bronze Champion Clem Douglas won at the 19th, beating Gill Hunt.
Congratulations to all who qualified.
Club Championships Update