At last we actually had some sunshine though not quite what you would call balmy. This brought out some of the best golf of the week. Captains comments to follow.

This was an exciting match to watch as Caroline 4 down at one point fought back to just 1 down. At the 17th Caroline was 2 down and hit a great drive. She was then on the green for 2 while Kate landed in the bunker with her drive and ended up 3 on the green. Caroline just missed her put for a Birdie and Kate holed a very long put for a half to stop them going down the 18th.

Next off were Louise Fraser (Kingsknowe) v. Wendy Nicholson (Baberton)

Louise did  not make the best of starts by becoming friends with a gardener on the 1st! It was a pretty tight match for while then Louise came back and was 2 up at the turn. Wendy had a chance at the 11th but just missed the green ending in the bunker. Louise held on despite great attempts by Wendy to fight back, then holed out at the 16th to win this match and take her through to the final.

Jacky Burnett refereed this match and they kept her busy this year but with nothing too controversial.

This match was played in great spirit and Jaci ended up losing to Isabel on the 17th to make Isobel Halliday our new B Champion. Isobel has nearly been there before and I think after the weather this week she was none to thrilled about trying again! Well done Isobel .
The sun was still out as the finalists made their way to the first tee.Sheila Stuart Captain of Turnhouse refereed this match. 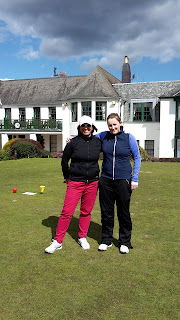 Louise Fraser and Kate McIntosh met together again in the final as they did last year at Baberton.

Louise made a great start by winning the first followed by a quick birdie by Kate on the 2nd to put it back to a/s.The next  4 holes were all halved and then Louise started to make a getaway by winning the next 3 holes. And so Kate 3 down at the turn started to turn the tables again. She won the 10th with a par, then the 11th when Louise shot one right through the green . So back to one up. They halved the 12th and then it was like a light went on in Kate. Narrowly missing a hole in one at the 13th Louise retorted with an excellent shot to the green that would have made anyone happy at other times and then just missed the put with Kate holing hers for a 2. Back to A/S .First Birdie of back 9.
Kate then played some amazing golf and birdied the next 3 holes to win 3 and 2 on the 16th with an amazing put. So to lose to all these birdies when you are parring was a bitter pill to swallow but as always Louise was very professional about it and kept smiling. Well done to both of you for making it such an exciting final day and well done to Kate our Champion again.

I would like to say a big thank you on behalf of Midlothian to Murrayfield and all their staff for making our Championship such a successful one. The course was in excellent condition and a real tester for our competitors. Thanks to all the admin staff who were so helpful and to Jane Neville and Fiona Ford for all their help. The professional staff there are always friendly and helpful. The catering was excellent and much enjoyed by all. The only thing they didn’t manage was the weather.
I would like to say a big thanks to to my Vice Captain Jacky Burnett and Tracy Laughland for all their support and help and to Ruth Brown our selector who was out in all weathers watching too.
And lastly to all those who took part and still managed to laugh despite the strange weather that was thrown at us. Amazing that golf courses only a mile away were closed due to being covered in snow.
Championship Finals Day