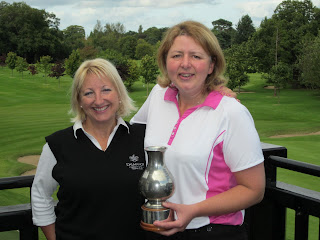 The Champion of Champions final took place at Royal Burgess today, with Karen Marshall (Baberton) beating Kim Horne (Dalmahoy) 4&3.  It was a very close affair early on.  The course was quite wet in places and playing very long.  Kim played some good steady golf and went ahead early on, but Karen made some great recoveries to stay in the match. In the end Karen’s length and her ability to get up and down from difficult lies and thick rough saw her fight back and move ahead, and once she had the lead she made sure she didn’t let Kim back in.

The sun shone and the match was played in a very friendly fashion, with good support from both clubs. Many thanks to Anne Brownie for refereeing the final – they kept her quite busy today, and to Royal Burgess for once again hosting this event.