Skip to content
Congratulations to Louise Fraser (Kingsknowe GC)
MCLGA Champion of Champions 2017
At the Royal Burgess Golfing Society today Karen Marshall, Baberton GC, met Louise Fraser, Kingsknowe GC, in the final of the Champion of Champions.  This is an extremely prestigious and keenly contested competition for the lady champions of Midlothian golf clubs.  As previous winners and beaten finalists both players were familiar with the course and looked forward to the challenge again.  The course was in excellent condition with extremely fast greens and the weather for once was on our side!  The game promised to be a real ‘ding dong’ between these two stalwarts of the County team! 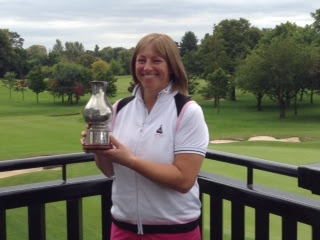 Louise immediately went into the lead but by the 3rd it was all square followed by Karen taking the lead at the 5th with a par.  Louise responded by winning the 6th then winning the 7th and 9th to be 2 up at the turn.  At the 10th Karen pulled Louise back to 1 up  and it  was up an down until the 14th when Karen was on the green in two whilst Louise took three after her drive landed behind a tree.  Louise sunk a very long putt (about 20 feet) to take the hole.  This proved to be a turning point in what was a very close game.  Throughout  Karen played excellent steady golf coming to terms with the speed of the greens fairly quickly whilst Louise found bunker after bunker interspersed with trees only to play fantastic recovery shots.
Going up the 17th supporters were beginning to consider the 19th!  Karen found the green with an exceptionally long second shot whereas Louise left herself short.  Advised by her caddy, Elaine Lumsden that she needed to leave herself with a single putt, Louise promptly went one better and holed with her chip!!
Many thanks to Norma Richmond, President, for introducing the players and starting the match and to Sheila Stuart for refereeing.
Champion of Champions 2017