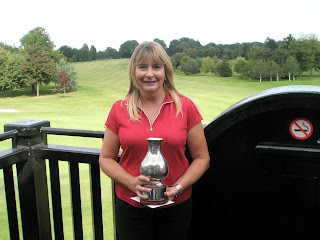 What a wonderful day it was today, blue skies, a course which was in fabulous condition and a band of supporters which made the rest of us all envious of the camaraderie which obviously prevails at Dundas Park. At one point there were 27 supporters – myself, 5 from Merchants and 21 from Dundas Park and the applause was as loud for the one competitor as it was for the other. But, you can imagine the cheer that went up on the 15th green when their competitor closed out the match! 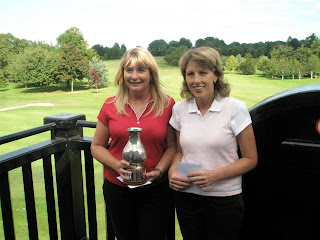 Julie Douglas from Merchants was taking on Alyson Scrimgeour from Dundas Park in the final of the Champion of Champions. Both were nervous as they stood on the first tee. Alyson was first to take advantage with a par 4 at the 2nd hole and increased her lead when Julie overshot the green at the 5th and took another 3 to get down. But in fighting tradition, Julie immediately jumped back, winning the 6th with a birdie. But she was unable to get it back to all square and had to concede the 9th hole to reach the turn 2 down. Having lost the 10th, Alyson knuckled down to win the 11th, 12th and 13th, the 13th with a fabulous putt for a birdie 2. Julie was not about to give up and won the 14th to return to 3 down with 4 to play. But it was a little too late as Alyson, again, turned up the heat and, with Julie catching a bunker off the tee and then leaking her approach shot to the right, struck two lovely shots onto the green and, having left her first putt short, sank the next for a 4&3 victory. As the ball hit the bottom of the hole, the cheers from the supporters erupted and were heard all over the course.
Many congratulations to both competitors for a very good final and well done to Alyson.
Champion of Champions 2010