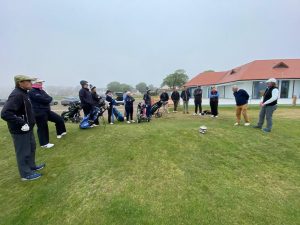 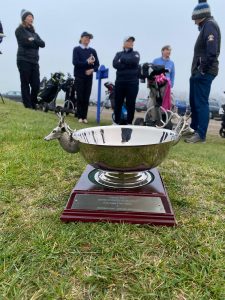 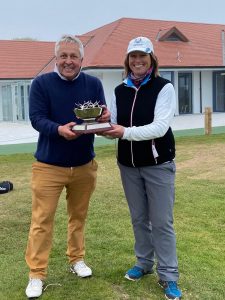 Last night, players from Midlothian, mostly the 2021 squad, returned to team golf representing Midlothian.  Thanks to Maura, Nicky and Karina for being involved so the match went ahead. It was great to see this fixture return and the first match for us since 2019.  The SUGS (Scottish Universities Golfing Society) match has been a fixture in the calendar since 1930 and it was a welcome return since covid-19 struck. Sometimes referred to as a sociable match, however, once all the players had teed off it does appear friendly but players in all the games are seeking their point for a team win.

Gullane was in sunshine earlier in the day but the East coast haar rolled in around 1pm and it was there to stay for the day and evening. Visibility was still quite good for the start of play but any games heading down the 15th, 16th, 17th and 18th would feel and see the effects of the haar.

In 2018 Midlothian won the trophy out right 3-1 and in 2019 we retained it with the halved match. It was all to play for. Without doubt I’m sure most of the matches were a tight fought contest as it usually is but in the end Midlothian emerged with a victory, 3 games to 1.

Thanks to Andrew Thomson for arranging the SUGS team and to SUGS Captain Bobby Watson. Although a good win for Midlothian it was enjoyable to resume the fixture again. No catering was on offer this year as the visitor Clubhouse is not due to open until next week. Unfortunate timing for all the players although the clubhouse is looking lovely after the refurbishment.