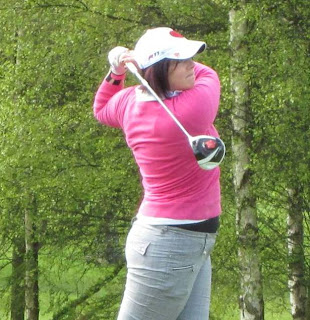 At the beginning of July, our Jane turned Professional.

Jane Turner started playing golf at the age of 8. Until then she much preferred to go with her Granny to make pancakes and cup cakes than accompany Dad and big brother to play golf.  One day she decided to go with them to play golf and that was it! From then on she was hooked.

She joined Glencorse, whose members encouraged and supported her and before long she joined Midlothian Junior girls and attended monthly coaching at the Braids with Mark Pratchett . Her golf blossomed and soon she became a member of the Junior Training Squad and went on to win the Midlothian Girls Championship. She was subsequently selected for the Scottish Girls Squad aged 14.

Thereafter she became a member of the Midlothian Main Training Squad and has represented the County on many occasions,  most recently in the Inter County matches at Glenbervie, where she played an integral part in securing our win to go forward to the County Finals at Stirling in September.

Thank you for your contribution to Midlothian, Jane – and thank you for the cup cakes! We will  miss you but wish you every success in your career in the Professional ranks.

Jane’s BA in Graphic Design has been put to good use in the design of her website which is well worth a visit at janeturnergolf.com

Keep in touch, Jane.
All the best

All the best, Jane