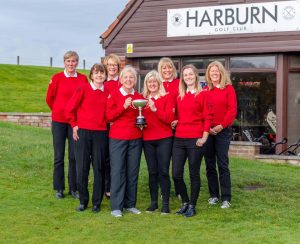 Congratulations to Harburn for retaining the MacFarlane Trophy in division 1 with 13 match points. Superb consecutive wins in 2017 and 2018. Harburn won the division after their home match win against Baberton with a game in hand to Mortonhall. Pictured above is the team who played against Baberton and the team photo from last year with all their players Janet Hardie, Jennifer Bryans, Sheila McEwan, Linda Boyle, Anne Stokes, Dorothy Wilson, Alison McBride and Sharon Marr. Great team effort. Division 1 runner up spot was potentially heading to a 5 way tie in the final few games and a count back would of been required. Kingsknowe won their final away match to Baberton securing the runners up position with 12 match points. 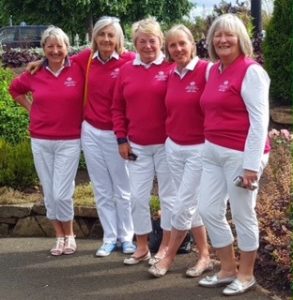 Congratulations to Dalmahoy winning division 2 Thomson Trophy with an untouchable 10 match points. Pictured are some team members Kim Horne, Sheila Keddie, Heather Porter, Pamela Woods and Linda Lindsay. Missing are Hilary Scott and Mary Nicol. Division 2 had to wait until the last league match of the season for runners up to be declared. Finishing on 7 match points and runners up in division 2, for the first time in the Clubs history, Ratho Park will be promoted to division 1. Well done team Ratho Park. Celebrations and history making all round for both divisions this year.

Division 1 teams relegated to division 2 will be Ravelston and Glencorse.

Division 2 teams promoted to division 1 will be Dalmahoy and Ratho Park.